(Warning: This article contains many spoilers for the season finale of Marvel’s “Loki.”)

The season finale of “Loki” lit late-night Twitter on fire Tuesday night after it dropped at midnight PT. We knew some big stuff was on the way — the Season 2 renewal wasn’t super surprising — but we didn’t know it would be quite like this.

Here’s the short version, just to help frame the fan responses below. In the “Loki” finale we meet He Who Remains, a man who lives in that castle at the end of time. He’s played by Jonathan Majors, who we’ve reported will play Kang the Conqueror in the MCU. But this probably isn’t Kang himself; just another variant of Kang’s original identity, Nathaniel Richards.

Also Loki and Sylvie kissed, but we’ll circle back to that later.

Basically, what we get in this episode is a lot like when Neo meets the Architect at the end of “The Matrix Reloaded.” Richards has brought Loki and Sylvie to the end of time because he thinks they should replace him as the custodian of the timeline. Or, he says, they can finish their mission and kill him, allowing a multiverse to form that will eventually cause the different universes to war with each other.

We see the multiverse in full effect in the last scene of the finale, when Loki returns to the TVA and tries to tell Mobius what happened — but Mobius doesn’t even know who Loki is, and the TVA now has a big statue of Richards where the Time-Keeper statues used to be. Things are changing, probably for the worse. We’ve got a deeper, spoiler-filled discussion of that ending here.

We don’t know exactly how all this multiverse stuff will unfold from here with “Shang Chi” and “Eternals” up next on the film slate, but we do know that “Spider-Man: No Way Home” will get into it with multiple Spider-Men in December, and the next “Doctor Strange” movie is literally subtitled “The Multiverse of Madness.” It’s safe to say Strange is gonna have his hands full when that movie comes out next May, and the fans are already worried about him.

But that ending wasn’t the only thing that had fans in a tizzy after the “Loki” finale. After way too much speculation about whether Loki and Sylvie would hook up (even though they’re the same person), they do finally kiss — but only because Sylvie is trying to distract him while they fight over whether they should kill Richards. The trick works, and she wins the fight. 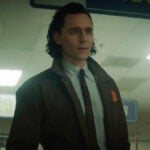 Even though her reasons weren’t exactly sincere, fans couldn’t help but have an emotional response to the kiss. They weren’t generally, uh, happy reactions.

There was a lot of that on Twitter in the early hours of Wednesday morning.

But beyond the kiss, the reactions were generally positive. One particular part of the episode that apparently sparked quite a few feelings was the opening bit before the “Loki” title card.

The MCU will barrel ahead for the remainder of 2021. There are three more movies on the slate — “Shang Chi,” then “Eternals,” then “Spider-Man: No Way Home.” And on Disney+ we’ll have “What If…,” which is probably going to give us a look at some of these new alternate universes that Sylvie just created, and then the “Ms. Marvel” and “Hawkeye” series, the latter of which will follow up with Yelena from “Black Widow.”