What pushed Coachella diehards from the early years away?

Music aficionados can cite the Hollywood invasion, the viral after-parties, the wristband arms race, transportation quagmires and the attitude of access one-upmanship as the cause for shouting “Nochella” across their social media and skipping the April festival as a matter of pride.

Getting to Lolla is as easy as getting to Central Park in New York. You can walk in right off the train or off the city block.

Sure, the majestic Instagram-ready beauty of the Indio desert in early spring is the reward for its remoteness, but the topographical distinction is not as trite as comparing an “urban” vs. “rural” festival setting. Last summer’s underwhelming “Made In America” festival experience, though set in downtown L.A., tasted like a better festival’s backwash.

Calvin Harris closed out Day 1 in 2014, with more fans than normal staying until the very end. Credit the central location and easy exit. ( Theo Wargo/Getty Images)

Easy Extraction
There is no soul-crushing extraction process at Lolla.

Unlike Coachella, there are no multi-hour, fenced-in, forced marches miles in the wrong direction from home to land in an Uber “pickup lot” masquerading as a refugee camp or a VIP lot that still sits at a standstill. From the moment you decide “We’re done. Let’s get out of here” to the moment a key slides in to a hotel room lock can be less than 30 minutes in Chicago.

WME chief Ari Emanuel’s brother is Chicago’s mayor, so you know the gameplan is whip smart. The entirety of Lollapalooza evacuated in 38 minutes a few years ago during a freak summer storm, and reopened hours later.

This easy extraction erases the geographic obstacles and closes the post-show enthusiasm gap to recast post-show parties, dinners, and the clubs as an easy encore to a day at the shows.

Eminem and Lorde both performed on the same day in 2014. (Getty Images)

The Set Times Come Out Months In Advance for Better Gameplanning
If you are a music schizo who could not decide between Sam Smith and Metallica’s conflicting set times on Saturday night, at least you would have months to sort yourself out.

Lolla released all of the set times and stage assignments before Memorial Day, two and a half months before Gary Clark, Jr., alt-J, and Alabama Shakes overlap on the opening day.

This year Coachella released set times on the Tuesday of the first weekend, 48 hour before the guests started arriving. 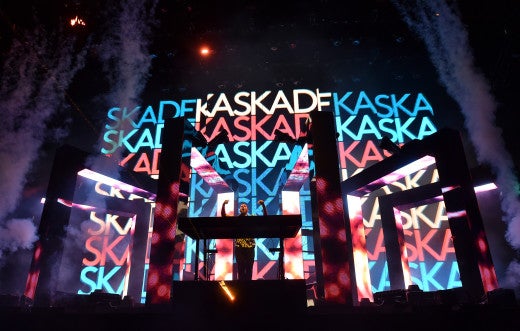 You Are Smarter in August than April
By August, you already know the summer jams. Perhaps you have seen your must-see artists a few times, either live or on livestream from any festival across the US or Europe.

When Kaskade played hit “Never Sleep Alone” at dusk on the main stage at Coachella back in April, it had only been out for 6 days. It had not yet been embraced. Watching a replay of his set now with a few months of perspective, the crowd’s numbness is eerie.

“Never Sleep Alone” went on to become a big track. Music fans are warmed up by August and will be rushing over for The Weeknd’s “Can’t Feel My Face” that was not even released until two months after Coachella.

Inevitably, some new song just released will fall on deaf ears this weekend, only to rocket up the Spotify charts around Halloween.

One of the VIP accessible areas. (Mikey Glazer)

Better VIP: Free Food, Drinks, Spa Services, and An Unfortunate Guy from “The Bachelorette”
At Lolla, VIP includes catered meals that make you feel like you’re on the road crew, open bars, massages, elevated viewing platforms of key stages, couches, daybeds, and golf cart service to shuttle you around the grounds

One way to look at it is that you would never spend $1,000 on food and drinks to make up the difference. The other way to look at it is, in my experience, the overall comfort and outing feels more like a day at the golf course or in a box at the Hollywood Bowl, while Coachella’s VIP is as marginal of an upgrade as snagging a coach class seat in the front of the plane instead of the back. (Full Disclosure: I’ve been given VIP passes to both festivals and gauge the soul-crushing exhaustion of 10 hours at Coachella VIP signicantly above 10 hours of Lolla VIP.)

For the intangibles, you’re unlikely to see any Hiltons or “Shahs of Sunset” fishing for attention in Chicago like they do in the VIP sections of the Empire Polo Grounds. It is not a celebrity heavy festival. Those in town are there on paid appearances and there is no shoulder economy of freelance celebs wandering around off-the-clock.

My most “oh, that guy” sighting last year was two-time “Bachelorette” loser Nick Viall, who lives in Chicago.

Better for the General Public
The “mile from end to end” has a farmer’s market, a midway of 37 restaurants including the prerequisite Chicago deep dish, and several shaded enclaves to self-sequester for a lunch, rest hour, or refuel.

Smart marketers are stepping in to the void, with Samsung luring general admission consumers to the Samsung Galaxy Experience to nail that wide angle selfie on the selfie-specific engineered Galaxy S6 and potentially win an upgrade to their festival experience. Samsung owners can win access to the Samsung Owners Lounge next to the company’s “main stage”, which has a VIP viewing platform, free food, and drinks, and close views of McCartney, Metallica, and Florence. This continues the Level headphones maker’s trend of going deep on multiple demographics of music experiences – from Coachella to Essence Festival in New Orleans to their own Milk Music service, which delivers content exclusives to the ticketless beyond the festival grounds.

Chicago is Friendly
My empirical research shows that natives who just had their last bit of snow melt last week and endure the Bears and QB Jay Cutler for the rest of the calendar year embrace a beautiful summer weekend and the out-of-towners who come in more warmly than other American metropolises.

Grantland recently nominated the town as a “Best Summer City”. I second that.

Lolla is Industry, But Not Too Industry
WME is a founder and equity partner in the festival, not just in booking acts but also leaning in to the creative and growth of the brand. (Trip tip: If you’re looking for a fun Spring Break 2016, try the back-to-back-to-back weekends at Lollapalooza Argentina, Lollapalooza Brazil and Lollapalooza Chile in March 2016.)

This year, the subtle Soho will welcome offshoots of at least one marquee headliner for a set in the house, and a buzzy band will come straight from the stages to close out the weekend at Soho on Sunday night.

There are music agents, and some light brand activations (Dell, Bacardi, and Uniqlo are all activating in town) but the weekend has not become the full fledged Hollywood invasion that draws snickers from rivals that that it has become “a fashion show”.

HAIM at the Virgin Hotels Chicago after Pitchfork on July 19. (Getty Images)

The Hotel After Parties
Because the show ends at 10 p.m. each night, there is a second window that does not exist at other festivals. Here are some of the best extracurriculars on tap.

Virgin has the heat. It’s not just the new kid on the block with the fancy sounding “chambers” (they don’t call their guest accommodations “rooms”). The buzz is also coming from the street-priced mini-bars, free wifi, and multiple venues: a music speakeasy 25 floors up and Cerise, the same kind of rooftop that has made EP| LP a hotspot in West Hollywood this summer.

HAIM made news by spinning here after the much smaller Pitchfork festival earlier in July.

On Lolla weekend, look for lots of artists camping out here. After Grant Park shuts down, Hot Chip is DJ’ing (Friday), Nylon throws a party with Lolawolf (Saturday), and Lion Babe and Chris Holmes will take over the decks on Sunday.

These parties are heavily private.

For years, brothers Ed and Bruce Starr and their BMF events have been throwing Lolla lounges with a mix of brand activations, a late night Salt-N-Pepa show one year, and/or a Kellan Lutz and his brother floating around. Now in a partnership with the Renaissance, their marquee event is “The Music Lounge” with G-Eazy on Friday night. “Lobby Programming” the rest of the weekend begins on Thursday night with the the Masterson brothers (Chris and Danny), and continues with Myles Hendrik and others spinning until 2 a.m. Friday-Sunday.

What used to be the only game in town during Lolla now has competition.

The HRH goes Friday and Saturday nights with their “Chicago After Party Series”. Classic hip hop comes first with the eye-patched “La Di Da Di” rapper Slick Rick’s only Chicago appearance. Jack Antonoff, who you have heard writing for Taylor Swift and seen winning 2 Grammys as part of “Fun” (“We Are Young”) is on the bill. His ’80s inspired side project “Bleachers” closes out the double header on Saturday night.

The HRH is pointing out “open bar” on all the invites.

There is a Sunday Night Scene

Before hopping a flight back to NYC for “The Tonight Show” on Monday, Questlove plays Studio Paris on Sunday night. Kaskade spins there two nights earlier as his second gig of the night. Meanwhile on Sunday, DJ Cobra spins at the Billy Dec’s Underground, one of the most fun weekend closeout parties in recent years that has been heavy on industry faces still in town.

Not a fan of either Lolla or Coachella? Hop on Southwest.  “Outside Lands” is next weekend in San Francisco.

"Wet Hot American Summer: First Day of Camp" had a world premiere, the first new footage since 2001, in NYC on Thursday, July 22