James Tyrone is as miserly as ever in the Roundabout Theatre Company’s Broadway revival of Eugene O’Neill’s “Long Day’s Journey Into Night,” which opened Wednesday at the American Airlines Theatre. Gabriel Byrne plays Tyrone with reserved, desiccated style. Every prematurely extinguished lightbulb, all those cheap hotel rooms he booked on the road, that quack doctor he ordered for his wife, and now the charity sanitarium where he’ll send his son to die of consumption — it’s all there in the tight, controlled way Byrne talks and moves and even sips his whiskey. James Tyrone has squeezed so much from life that he appears almost mummified in that vest suit he never unbuttons, and could well have been wearing for years, if not decades.

In a Broadway season of big (often too big) performances, Byrne’s portrayal stands out for its understatement, and something else, too. Amid all the stinginess, he brings a palpable love to his relationship with Mary (Jessica Lange), the wife he has single-handedly destroyed.

His is the worst kind of love, the kind that believes it can conquer all. The irony is that it’s the same blinded love that Mary has for their consumptive son, Edmund (John Gallagher Jr.). James will make sure Edmund never gets the cares he needs, but it is Mary’s love that has prevented them from acknowledging the true, deadly nature of his illness. 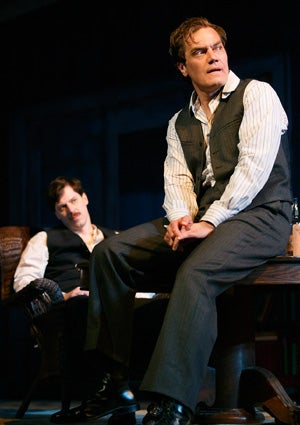 Lange gives one of those big performances. It’s not just the final “enter Ophelia” scene down the staircase where she’s strung out on dope. Her Mary is clearly high or drunk most of the time, and when she isn’t, it’s obvious why she will soon resort to alcohol and morphine.

Tom Pye’s set design creates a very spacious summer residence for the Tyrones. Lange’s performance works against that openness to create Mary’s own desperate claustrophobia. It’s a big performance, but there’s nothing mechanical about it, especially the love that she projects back to Byrne.

The great beauty of O’Neill’s play is its repetition. He captures the way families can be civil one moment and at one another’s throats the next. Under Jonathan Kent’s direction, Byrne and Lange handle those sharp changes in tone adeptly to create a mesmerizing dance of death.

Kent is not as fortunate with Gallagher. Those shifts are jarring, sometimes risible, when he attempts them. Kent also pushes Colby Minifie in the small role of the maid. The girl may be coarse, but Mary isn’t deaf and dumb.

Then there’s Michael Shannon as the other son, Jamie, which calls to mind a remark by the late great Colleen Dewhurst, who once told an interviewer that even at age 16 she could not play Juliet. Shannon should probably never be cast as anyone’s son — whatever the age.

In the first half of the play, even though Shannon tries to recede into the background, his immense presence pulls focus. He’s not only much taller and bigger than everyone else on stage. He has the kind of face that can project thoughts to the back row. He’s a force of nature, and Byrne’s James Tyrone, especially, could never be his father.

Frankly, Shannon could play James Tyrone right now, and make it perfectly understandable why such a man would crush any woman. Who wouldn’t want to see that performance?