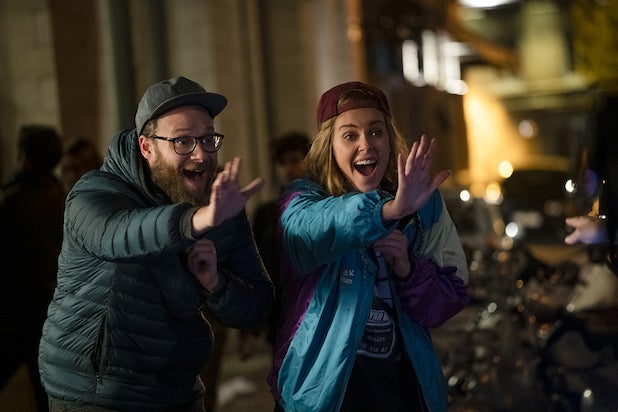 “The Intruder,” the new Sony/Screen Gems thriller starring Dennis Quaid as a sinister home invader, made $865,000 in its Thursday previews from 2,073 screens. It opens on approximately 2,200 screens this weekend.

It’s one of three wide releases this weekend along with Lionsgate’s comedy “Long Shot” and STXfilms’ animated family film “UglyDolls.” All three are opening opposite “Avengers: Endgame,” which will carry its already record-breaking first week into a similarly impressive second weekend. The Marvel film is expected to cross $500 million domestically on Friday and $2 billion worldwide this weekend after adding an unprecedented $562 million to its global total. After eight days in theaters worldwide, “Avengers: Endgame” has a total gross of $1.78 billion, passing the entire theatrical run of “Jurassic World.”

“The Intruder” tells the story of a young married couple (Michael Ealy and Meagan Good) who buy their dream home in Napa Valley, only to find out that the house’s previous owner (Dennis Quaid) is still strangely attached to it and continues to infiltrate their lives, causing them to suspect he has hidden motivations beyond a quick sale. Deon Taylor directs the PG-13 thriller, which was written by David Loughery.

Sony is predicting a $9 million opening for the film against an $8 million budget, with independent trackers saying it could also reach the low-teens. Screen Gems’ horror film, “Slender Man,” which had a similar budget, opened in August of last year and made $1 million in its Thursday previews before earning $11.3 million in its opening weekend. “The Intruder” has faced negative reviews, receiving a 28% score on Rotten Tomatoes.

“Long Shot,” Lionsgate’s adult romantic comedy starring Seth Rogen and Charlize Theron, earned $660,000 at the box office in its Thursday previews from approximately 2,500 screens. It opens on more than 3,230 screens this weekend. It is projected to earn between $9-14 million in its opening weekend. By comparison, Lionsgate and Pantelion’s rom-com remake of “Overboard” made $675,000 in Thursday previews opposite the second weekend for “Avengers: Infinity War” before opening to $14.7 million.

“Long Shot” debuted at SXSW and earned strong reviews and positive word of mouth, as well as the festival’s Audience Award. The R-rated comedy stars Seth Rogen and Charlize Theron, with Rogen playing an average Joe journalist trying to woo Theron, who is now one of the most politically powerful women in the country. Jonathan Levine (“Snatched,” “The Night Before”) directs the film, which has an 87% score on Rotten Tomatoes.

“UglyDolls,” the first CGI animated film from STX, grossed $300,000 from 2,250 screens and will open wide today on 3,652 screens. Like “Long Shot,” “UglyDolls” is projected to open in the low teens. Reviews have been mostly negative with a 31% Rotten Tomatoes score. The film has a $45 million budget co-financed between STXfilms and Alibaba Pictures.