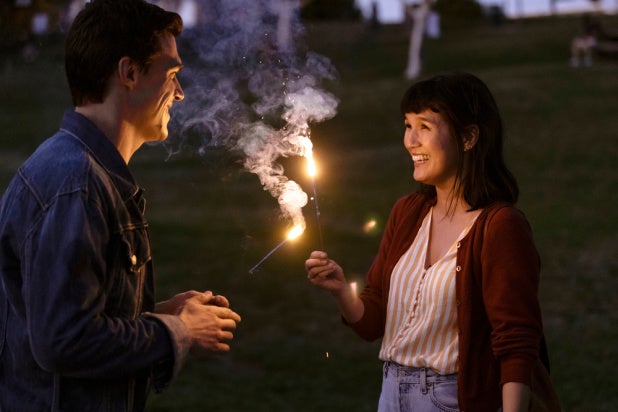 If you ever wondered what Richard Linklater’s “Before” trilogy would be like without the insightful writing, sharp directing and intuitive performances, “Long Weekend” will pretty much fill the bill.

The film’s aim-for-the-back-fence plot twists might have worked in a movie where audiences were invested in characters that were already grounded in a recognizable reality, but so much of the film’s lurching running time seems trapped in a woozy approximation of countless 1990s a-guy-and-a-girl movies that it’s hard to care about the love story on its face, much less to follow along as it takes wild leaps and bounds.

Those leaps aren’t revealed in the trailer, so they will not be mentioned here; suffice it to say that they won’t take viewers out of the story only because there’s so little story to begin with.

Would-be writer Bart (Finn Wittrock) is pulling himself together after a bad break-up a year earlier sent him on a downward spiral; that entails moving out of a gorgeous rental and into the garage of his married best pals, as well as taking a job writing copy for a medical-supply catalog. (Bart’s landlady is played by Wendi McClendon-Covey, the married friends by Damon Wayans Jr. and Casey Wilson, and his new boss by Jim Rash, all of whom appear in the first 10 minutes, and these cameos offer a tantalizing glimpse of a much, much better movie that never pans out.)

At the movies, Bart runs into Vienna (Zoe Chao, “The High Note”), who convinces him to take her out for drinks. The two spend the evening together, eventually hooking up at her hotel, and it looks like Bart is ready to find love again. But why does this stranger not have a cellphone? Why is she carrying huge amounts of money in her purse? Why does she have no ID? She’s coy for a while, but as she and Bart grow closer, she finally has to explain who she is and why she’s there, and Bart must, in turn, decide either to reject her fantastical story or to take the plunge and trust that she’s telling the truth.

There’s the germ of an idea here, and cinematographer Felipe Vara de Rey (“See You Yesterday”) is clearly reveling in turning Southern California into a glossy, rom-com bauble (from downtown L.A. dive bars to the grandeur of the desert), but “Long Weekend” never quite gets it together. It’s all so cutesy, so twee, so unengaging.

And so miscast: Wittrock and Zhao have been appealing in other projects, but they lack zing in tandem, and without that spark, it’s hard to make the leaps that the plotting demands. And on his own, Wittrock isn’t really right for this role, either.

Bart acts shocked that Vienna picks him up, which is a little hard to buy. It calls to mind an anecdote in Mark Harris’ new book about Mike Nichols, in which Robert Redford had been considered to play Benjamin in “The Graduate.” When Nichols asked the actor if he’d ever been turned down by a woman, the director recalled, “he said, I swear to you, ‘What do you mean?’ He didn’t even understand the concept.'”

“Long Weekend” feels assembled from the spare parts of countless romantic comedies and Sundance indies of the last few decades. (There’s even a scene in which Bart asks Vienna if she’s a “manic pixie dream girl,” as though invoking that trope means that the film isn’t also indulging in it.) Like a musical that leaves you humming the tunes from other musicals, its main function is to invoke comparisons to superior work.