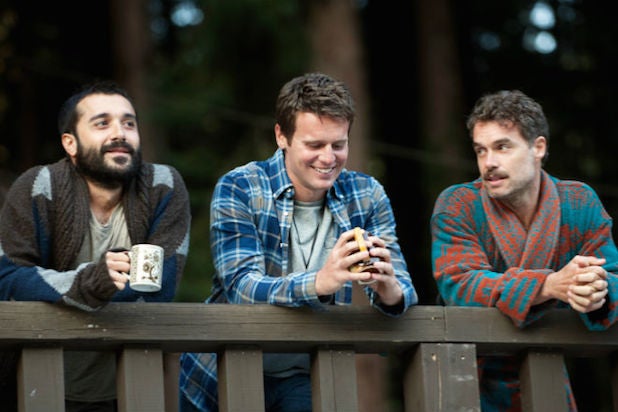 The trio is in desperate need of a vacation. Patrick’s having an affair with his boss, Kevin (Russell Tovey), who still has a boyfriend. Agustín is partying too much. And Dom is struggling with his open relationship with Lynn (Scott Bakula). Doris (Lauren Weedman), the gang’s token gal-pal, shows up unexpectedly and serves up a hefty dose of comic relief.

“This season we jump in right where we left off,” Groff tells TheWrap. “Expect to see a lot more shirtless Russell Tovey.”

See video: HBO Teases New Season of ‘Looking’ With Color and Smiles, But They’re Hiding Something

TheWrap spoke to Groff and writer/director Andrew Haigh to get a sneak peek at this season’s twists and turns.

1. The Patrick-Richie-Kevin love triangle.
Patrick is struggling with his affair with Kevin, who refuses to break up with his boyfriend. It’s the kind of relationship that would usually merit an “it’s complicated” on your Facebook status. Making things worse, Richie shows up at Patrick’s door. Even though the two haven’t spoken since they broke up, things aren’t over between them.

Adding to the drama, Patrick is uncomfortable with the fact that he’s dating a taken man. But, he can’t seem to find his way through it. At the end of the episode, Patrick finally tells his buddies he’s been having an affair.

“I think it illuminates Patrick’s desire to finally make a change,” said Groff. “At this point, he tells his closest people that he’s having this affair. Usually in my life, when I finally say something, it means that I’m ready to actually start dealing with it.”

Now the question: are fans on “Team Kevin” or “Team Richie?”

2. The perils of open relationships.
Dom and Lynn seem to have settled into their groove. But, while Lynn seems comfortable with the idea of seeing other people, Dom has a harder time navigating the complexities of an open relationship. When Dom returns from a getaway to San Francisco, Lynn wants to know if he’s had sex (he did). That makes Dom uncomfortable.

“We wanted to explore that kind of relationship a little bit,” said Haigh. “We’re really pleased that they got together. But, it’s complicated. It’s not just that there’s an age difference between them. We’re going to see their relationship get a bit more messy. I don’t want to give too much away, but things take a surprising turn. We’ll get to see Lynn in a bit of a different light.”

3. Shirtless (and pantless) Russell Tovey
Expect to see more Tovey this season. A lot more. In the first episode, viewers will get to see the British actor in all his glory. Bottom line, this show has never been shy about its sex scenes, and this season is no different.

“We’re really pleased Russell is a bigger part of this season,” said Haigh. “ We didn’t set out to have him shirtless. But, if people tune in to see him shirtless and they’re happy, hopefully they’ll stay for the rest of the story.”

4. Gay Rugby
Other than sex and relationships, this season will be jam-packed with men in tight shorts. This, after Dom joins a gay rugby team.

“It’s something that gay men love to do,” said Haigh. “We wanted to show a whole spectrum of gay life. The more we can show different aspects of gay life, the better the show becomes.”

Groff added: “There are so many more stories to tell. We’ve barely scratched the surface.”

Also Read: Jonathan Groff Sets Out to Find Himself – and Maybe God – in ‘C.O.G.’ Trailer (Video)

Still reeling from the dissolution of his relationship, Agustín turns to drugs and alcohol.

He’s lost his job, his home and the love of his life, all in one swoop. Even though he insists he’s in control, it’s clear his life is in a downward spiral.

“I think we see Agustín moving in a really interesting direction as he tries to make better decisions with his life,” Haigh said. “He starts off making all the wrong choices. His friends are worried about him because he’s in a bad situation. He’s not sure what he wants to do with his life and he’s a bit of a mess. And I think you really want to rally around him. But, as the season progresses, he does better.

One more thing to keep an eye on: his relationship with Eddie (Daniel Franzese), who according to Haigh “becomes an important person in his life.”

6. A much faster pace.
While last season was notoriously slow, in comparison this one seems to move at the speed of light. There’s a lot going on: drugs, infidelity, and unprotected sex (including a brief AIDS scare).

“Last season, we had to spend a lot of time setting up the story and characters,” said Groff. “This season, we sort of jumped right in and immediately got into the action of the story. Patrick starts to further push the limits of his relationship with Kevin, trying to make the affair work. He’s also starting to return to Richie. As you know, starting a friendship with an ex can be complicated. So there’s a lot more going on.”