Note: Spoilers for “The Lord of the Rings: The Rings of Power” Episode 4 – titled “The Great Wave” – follow below.

Four episodes into its first season, “The Lord of the Rings: The Rings of Power” introduced its major villain: Adar. While Sauron still looms over the events taking place in the prequel series, Adar poses a real, physical threat in The Southlands as the leader of the orcs who are hunting for Sauron’s blade.

This week, Adar was revealed, and if he looks familiar there’s a good reason. The character of Adar is played by actor Joseph Mawle, who most notably played Benjen Stark (aka “Coldhands”) on “Game of Thrones.” The brother of Ned Stark, Benjen appeared in the show’s first season before disappearing north of the wall and reappearing in the HBO series’ final seasons – albeit with a bit of frostbite on his face as he was starting to turn into a White Walker.

But back to Adar – who is this dude? Well, he’s not in the books, we can tell you that.

Adar is clearly an elf, and Arondir (Ismael Cruz Córdova) is perplexed for good reason when he gets eyes on him. In J.R.R. Tolkien’s Middle-earth saga, elves are not known to fall prey to the “dark side” so to speak, so for Andar to be leading an orc army to bring about a new world is a pretty huge deal.

“You have been told many lies,” Adar says to Arondir when Arondir asks who he is. “Some run so deep even the rocks and roads now believe them. To untangle it all, would all but require the creation of a new world. And that is something only the gods can do. I am no god. At least, not yet.”

So Adar is a bad elf who desires to remake the world in…a very dark fashion. He even gives Arondir an ultimatum to deliver to the men of the Southlands. “Your people may live if they forsake all claim to these lands and swear fealty to him,” Arondir tells Bronwyn (Nazanin Boniadi).

Does Adar know where Sauron is? Is he planning to swear fealty to Sauron, or hoping to run things in his stead? And what’s Adar’s backstory? All good questions that we’ll hopefully learn the answers to in future episodes. 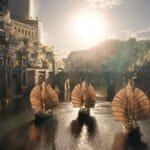 Also Read:
‘Lord of the Rings’: What Is Númenor? The History of Tolkien’s Atlantis
x