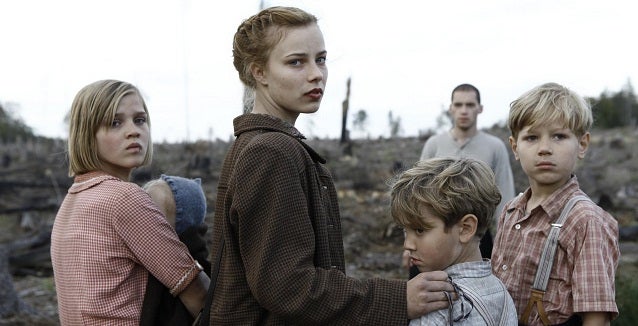 Coming of age is never easy, but the adolescent protagonist of this impressionistic and nuanced film has to do it amidst the devastation in a crumbling Germany at the end of World War II.

“Lore” is based on “The Dark Room,” a 2001 Booker Prize-nominated novel by British author Rachel Seiffert. The movie’s title character is Hannalore (Saskia Rosendahl) — Lore is the diminutive — the eldest daughter of a mother and father who are staunch Nazis.

Lore’s dad is an officer in the SS and her mom is a true believer who, when Hitler kills himself in the final days of the war, mournfully tells Lore, “It’s the end.”

Soon, Lore and her four younger siblings, including an infant, are left to fend for themselves in the midst of the Bavarian woods after their father is captured and their mother surrenders to the authorities.

The children set off on a perilous trip to their grandmother’s house, a journey akin to an odyssey in a dark fairytale, only here the threatening forces they encounter are soldiers from various nations, avaricious fellow countrymen and other desperate refugees.

In many ways, “Lore” is a tale of disillusionment and discovery. As Lore shepherds her siblings across Germany, she witnesses ruin and wreckage all around her, is helped by and finds herself attracted to a youth (Kai Malina) who may be Jewish, and sees evidence of the concentration camps.

Sheer experience forces her to question her previous blind certitude about a glorious Fatherland and the rightness of the Nazi cause, notions instilled in her by her parents since earliest childhood. It’s a moral and intellectual journey many Germans found themselves forced to make after WWII.

“Lore” is directed by Cate Shortland, the talented Australian director whose impressive first film, “Somersault” (2004), was also about a girl’s coming of age and sexual awakening (and introduced filmgoers to Abby Cornish and Sam Worthington). She again shows a gift for delicately delineating a young woman’s confusion over her identity and developing sexuality and for getting a first-rate performance from a young, untried leading lady.