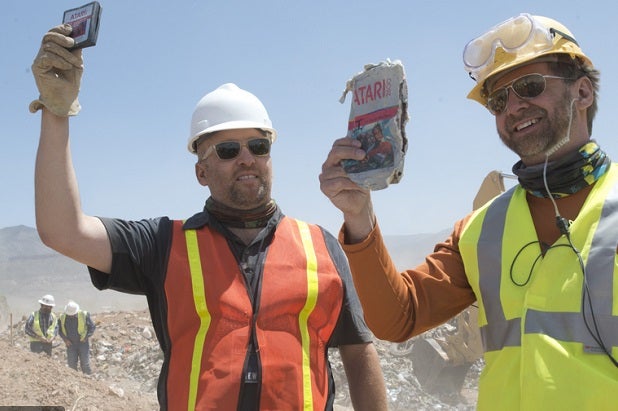 Hundreds of tape cartridges of the video game “E.T. the Extra-Terrestrial” were discovered Saturday in a New Mexico landfill about 200 miles south of Albuquerque.

Some gamers have speculated for decades about the existence of the tapes, supposedly dumped by the game‘s maker Atari after it was commercial disaster.

The discovery was made Saturday as Microsoft Corp.’s Xbox Entertainment Studios was working on a documentary surrounding the mystery.

The game was rushed out to coincide with the release of Steven Spielberg‘s 1982 hit movie “E.T. the Extra-Terrestrial.” It was was a design and marketing failure — it has been called the worst video game ever — and many believe it contributed to a collapse of the video game industry in its early years.

Atari, saddled with most of the 5 million “E.T.” game cartridges produced, supposedly buried them in the New Mexico desert in the middle of the night.

Excavators on Saturday went to Alamogordo hoping to provide closure to this legend and get some footage for the upcoming original film by Xbox, “Atari: Game Over.”

They scored, with the first batch of E.T. games was discovered under layers of trash after about three hours of digging, a Microsoft spokeswoman said

“For a lot of people, it’s something that they’ve wondered about and it’s been rumored and talked about for 30 years, and they just want an answer,” Zak Penn, the film’s director, told Reuters.

When the game was first released it retailed for around $30, but now often sells on eBay for less than $5.

“I don’t know how much people would pay for a broken ‘ET’ game, but as a piece of history, it has a much different value,” Penn said.