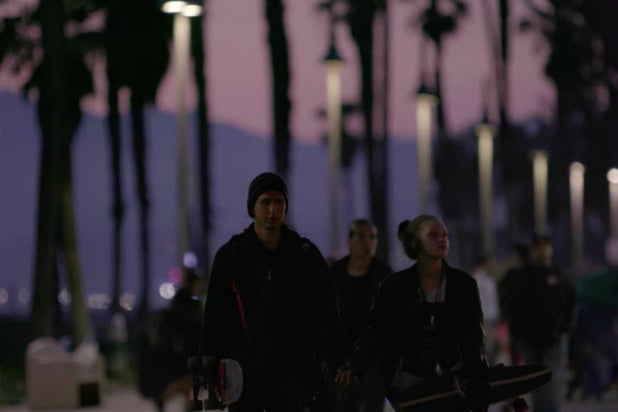 Director Rotimi Rainwater’s “Lost in America” could have easily been another forlorn look at a pervasive tragedy: childhood homelessness. The documentary is often relentless in its intention to show you just how urgent this issue is. But ultimately, it offers you something many similar films don’t — hope.

It’s not an easy thing to accomplish. From its opening scenes, we meet one young person after the next sleeping on the ground, struggling to keep the few belongings they have safe from thieves, and just barely holding on to their wills to live. But they’re not just the faceless people pushed to the margins of society so many of us are used to noticing and swiftly walking past on the sidewalk. Rainwater introduces us to who they are and helps them tell their stories.

For instance, there’s 19-year-olds Makayla and Conner, a Seattle couple who have already been living on the streets for one year. They had jobs once. They had roommates and apartments. But then they didn’t. We learn later in the film that they’ve suffered from addiction, miscarriage, and have only been held together by the love they have for each other.

Tampa resident Crystal, 27, shares a shattering account of having to fend for herself after her father and sole guardian died when she was only 12. Worried about living with strangers in a foster home, she’s lured by a kind voice on Facebook into sex trafficking, with countless other young girls.

Denard, now 22, recalls growing up in Tampa, where his relationship with the church was twofold. His chief inspiration came from the house of the Lord. He was also repeatedly told by family and fellow congregants alike that his homosexuality meant that he had demons living inside him, and he would consequentially be punished by God. The church turned its back on him, as did his parents, forcing him to sleep behind dumpsters at night.

Though the stories continue from there, sweeping the nation from coast to coast, Rainwater’s interviews never seem exploitative. Steven V. Vasquez Jr.’s natural cinematography shows these children and teens almost blending in with the cold, detached streets on which they merely survive. But we learn that the filmmaker’s motivation to humanize them is in part due to his own experience being homeless. More importantly, though, he’s motivated both to examine the problem and to present a solution.

Watch Video: Halsey Considered Letting 'a Stranger Inside of Me' to Pay for Food

As such, “Lost in America” goes beyond simply detailing the stories of many homeless youth in the U.S. The filmmaker, with the help of a hefty array of producers including Rosario Dawson, narrates the history of childhood homelessness in the country as well as the abysmal statistics. Though the depressing facts — from addiction, suicide and being abandoned for being LGBTQIA to parental abuse and rape — are only faintly illuminated on the dim screen, it’s refreshing to see influential figures like Halle Berry, Jon Bon Jovi, Jewel, and Tiffany Haddish lending their voices of concern over what’s happening to these children.

But it’s also about how the system has historically failed them. Rainwater gets remarkable access to youth workers and those struggling to make a difference at impactful organizations like the National Runaway Safeline and the National Network 4 Youth to provide an overview of what has been done over the last few decades and what still needs to happen. He also confronts members of the government, including the Department of Housing, pointing to issues of complacency and unwillingness to prioritize the problem.

All of this creates a heightened urgency around an issue, which seems to be one of Rainwater’s goals with the film. While “Lost in America” certainly compellingly reflects a dire issue, though, its celebrity-packed cast and slow scroll of solemn statistics across a series of depressing images does veer the film into public-service-announcement territory that will undoubtedly turn off some audiences.

The director’s tireless devotion plays somewhat more effectively as we watch him follow up with some of the youth interviewed. Audiences witness how his subjects’ trust in him results in their loved ones contacting him when they’re in peril or just to tell him how they’re doing now.

That’s where “Lost in America” succeeds while some other documentaries that explore the same issue don’t. (“Lost Angels: Skid Row is My Home” and “Queen Mimi” come to mind.) There’s a sense of personal connection that carries from the director to the audience, which even Rainwater admits is usually a no-no for documentarians.

For this film, though, it adds a necessary layer of confidence for people who can make a difference to continue the fight to end homelessness among youth. By the end of “Lost in America,” we see how something as simple as attention, thoughtfulness about the issue, a sandwich, a helping hand, or even conversations with influential figures can help move these young people from the streets to receiving college tuition, shelter, or a voice in front of Congress.

“Lost in America” isn’t exactly a cinematic masterpiece, and sometimes its prosaic filmmaking does it no favors, but the film’s ability to move the conversation forward merits attention.