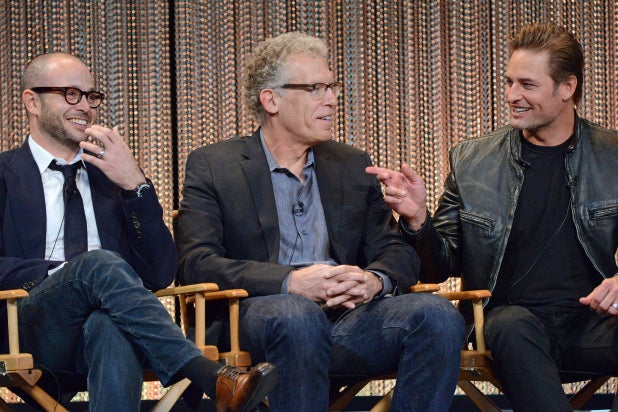 “Lost” held its 10-year reunion at PaleyFest on Sunday night, where the creators and cast rehashed the show’s six seasons, shared memories and inside jokes, but held tight to the unexplained mysteries of the iconic ABC drama.

And the elephant in the room — missing Malaysian Airlines Flight 370 —  was another mystery that was off limits. Panel moderator Paul Scheer briefly addressed the eerie timing of the event: “Let’s not ask questions about that, because it won’t be in good taste,” Scheer said.

The panel was the fastest-selling ticket in PaleyFest history. After opening with “Lost”-centric jokes, Scheer introduced the creator and head writer of the series, Damon Lindelof and Carlton Cuse. The duo riled the packed house up a bit, then rolled an early episode before the full panel took the stage.

Here are some of the best quotes and stories shared at Sunday’s panel:

Paul Scheer, genius warm-up act
“How many of you were watching the show from the very beginning?” Scheer asked to racous applause. “Congratulations, you’re old.”

The creators still have teasers
“We debated whether or not we should show you the real finale,” Lindelof joked to the crowd.

The “Lost” creators are no better than the common thief
“Maybe the cover of the hatch fell off the truck,” said Lindelof, who stole the set piece and made a coffee table out of it.

Cuse nabbed the countdown clock from the hatch — a great souvenir choice.

“Lost” fans are bat-shit crazy
The cast recalled the time that O’Quinn was more-or-less kidnapped when he tried hitch-hiking a lift to his Hawaii home — the fan instead took the actor back to her place to show John Locke off to her husband.

Holloway was offered a chicken dinner by a fan that he said he’s seen “a few too many times.” For the rest of the night, “chicken dinner” because a euphemism for sex.

They’d rather not really hear your opinion of the finale
“I gotta go pee,” Lindelof joked when the discussion turned to the series ender.

The castaways as we know them could have been very different
“There was no Sun in the ‘Lost’ script, because there was no ‘Lost’ script,” Lindelof admitted to the adoring crowd, who hung on his every word the whole evening.

But he and Cuse liked Kim so much (partially after finding out how famous she was from the Korean version of “Titanic”) that they wrote the part for her. Kim had originally auditioned for the role of Kate (Lilly).

Also, Hurley read for Sawyer — can you imagine that version of the show’s famous love triangle?

The writers didn’t quite nail the whole foreign language thing at first
“You know, Daniel, what he’s speaking isn’t actually Korean,” someone told the creators after the show had already been airing.

But Cuse had a good joke for it at the panel: “It was country Korean.”

Perhaps they should have kept their actors more informed
The duo famously kept backstory info from their cast until it absolutely needed to be shared.

On not telling O’Quinn his character’s backstory: “That’d be pretty useful information,” Lindelof set up. “You know, you were in a fucking wheelchair.”

Plans have changed
Lindelof and Cuse wanted to kill Jack (Fox) off in the pilot. They liked the idea of marketing the show around a character, having the actor do all the press, and then axing him immediately.

But, “Somebody was like — is that really smart?” Cuse said, after all the marketing money was spent and the billboards were up. The rest, is TV history. (Hmmm … however, given Fox’s lack of participation in this 10-year reunion, wonder if they’re rethinking this decision right about now? Just sayin’.)

Still, they killed off plenty of Oceanic Flight 815 ticket-holders
The first was Boone (Somerhalder), who was also the first cast. He took it like a pro. So much so, in fact, that Lindelof make a declaration: “In the end we were like: we’ve got to kill more of these guys.”

On that Season 5 Outrigger scene that you all want to know about
“The scene exists, it is on paper,” Lindeloff said, adding that one day they will auction it off for charity. Maybe in five years we will all understand who else was in that firefight.