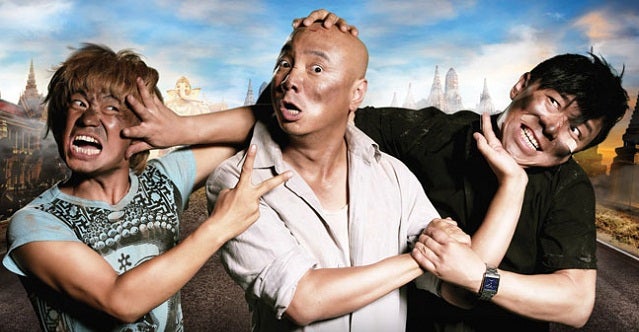 American audiences will get their first look Friday at “Lost in the Thailand,” the low-brow comedy that has become the highest-grossing Chinese film ever.

The mini-budgeted “Lost in Thailand” — it cost less than $5 million to produce — has taken in more than $201.9 million since its mid-December debut in China.  It was that country's highest-grossing film in 2012, easily outperforming the 3D re-release of "Titanic," which was second with $58 million. It will premiere in North American on 29 theaters via AMC.

The success of “Lost in Thailand” in its home country, now the world's No. 2 movie market, is notable, according to BoxOffice.com vice-president and chief analyst Phil Contrino.

"This is significant for a couple of reasons," told TheWrap during its record-breaking Chinese run. "It shows the growing strength of the Chinese industry, but also that they are willing to adapt — and not just import — films with very American sensibilities.

Chinese comedian Xu Zheng directed and stars in “Lost in Thailand.” He plays a scientist who has developed Super Gas and is racing his evil rival (Huang Bo to Thailand to get the approval of his boss. On the flight there, he falls in with a simple Chinese pancake flipper (Wang Baoqiang ) with grand plans for his vacation. Then the fun begins. The film has drawn comparisons to Universal's 2011 hit "The Hangover 2," in which three buddies head to Thailand, get lost and, well, then the fun begins. That film never played in China, but there seems to be more than laughs behind the sweeping appeal of "Lost in Thailand."

Also read: 'Life of Pi' Knocked Off by 'Hangover' Knock-Off in China

No one is calling “Lost in Thailand” nuanced, but Chinese critics have pointed to how its sensibilities spoke — with a very silly voice — to that country's middle class. Among other things, the fim's none-too-sharp Chinese Everyman turns out to be the film's wisest character.

The timing of its release, well ahead of the New Year holiday in China and in a marketplace devoid of other comedies, helped its record-breaking run, too.

The limited U.S. release signals that AMC is targeting a niche, rather than blockbuster, audiences.

"We are thrilled to present 'Lost in Thailand' now, in time for Chinese New Year celebrations, as many of our guests have requested," she added. The Year of the Snake begins Sunday, according to the Chinese calendar.