Disgraced comedian Louis C.K. will be returning to the stage this month as part of a 24-city comeback tour around the country.

The tour kicks off Aug. 13 and 14 with two nights at New York City’s Madison Square Garden and concludes with two nights in Boston in mid-December. Some dates on this current tour are rescheduled from a 2020 tour that C.K. had planned but was forced to cancel due to the coronavirus pandemic.

C.K. plans to also take the tour overseas; he is scheduled for appearances in the Ukraine, Denmark, Germany and Romania in 2022.

According to C.K.’s website and an email promoting the tour first reported by the New York Post, the comic said he will try to avoid spreading the coronavirus at his gigs and plans to “comply with the local governments of each city in terms of health standards and practices. Like everyone else, we will just do our best under the circumstances.”

After initially staying mum on the allegations, C.K. did admit to them. “These stories are true,” C.K. stated at the time. “At the time, I said to myself that what I did was OK because I never showed a woman my d— without asking first, which is also true.”

C.K. continued in his statement, “What I learned later in life, too late, is that when you have power over another person, asking them to look at your d— isn’t a question. It’s a predicament for them. The power I had over these women is that they admired me. And I wielded that power irresponsibly.” 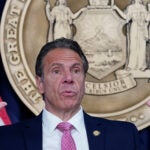 Following his admittance of the sexual misconduct, C.K. suffered a massive career fallout — he was dropped by his management team at 3 Arts Entertainment and his APA agency and publicist Lewis Kay also cut ties. C.K.’s film he was working on at the time called “I Love You, Daddy” for distributor The Orchard was shelved and streamers FX, Netflix, HBO and TBS all distanced themselves from the former star.

C.K. himself said he lost $35 million in an hour after the allegations were made public.

The comedian whose show “Louie” won three primetime Emmy Awards did try to get back onstage prior to this tour, but his standup sets were not exactly well-received. In particular, C.K. was torn up online after telling a joke at a December 2018 gig in Long Island about school shooting victims — which, understandably, was deemed by most to be in poor taste. “You’re not interesting because you went to a high school where kids got shot,” C.K. said during the gig.