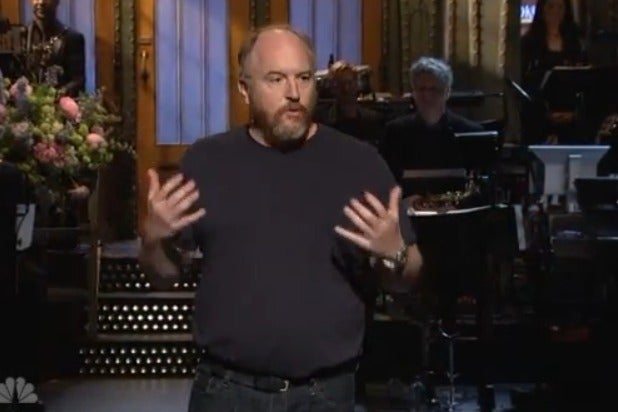 Louis CK thrives on controversy. So it should come as no surprise that the comedian served up a healthy dose of edgy jokes about child molestation, racism and Israel in his opening monologue when he hosted the 40th season finale of “Saturday Night Live” this weekend on NBC.

In a joke about being mildly racist CK said, “I grew up in the ’70s, so I’m not racist. However, I do have mild racism. I’ll give you an example. If I go to a pizza place I’ve never been to before and it’s run by four black women, I’ll go, ‘Hmm.’ It’s very mild.”

The Emmy-winning star’s jokes about Israel and Palestine and child molesters were just as politically incorrect.

“My kids are like Israel and Palestine and I’m like America,” the third-time host said. “The little one’s like Palestine because she always gets screwed. She gets the worst deal. She’s like, ‘She threw a rock at my face’ and I’m like, ‘You’re fine. You have a great life. You have to take a rock to the face once in a while. You’re fine.'”

“The older one is like Israel,” CK continued. “She comes up to me like, ‘She burnt all my dolls!’ I’m like, ‘Look, I can’t do anything about it right now. Your sister is crazy. Please don’t make me talk to her. I’ll work it out, you and me. I’ll buy you a really cool missile and whatever you do with it is totally up to you.”

CK closed his monologue with jokes about a child molester who lived in his neighborhood when he was a kid. After that, CK compared his love of Mounds candy bars to child molestation, adding that if offenders do it, knowing they can get caught, the act must be irresistible.

“Child molesters are very tenacious people,” he said. “They love molesting childs, it’s crazy. It’s like their favorite thing. It’s so crazy, because when you consider the risk in being a child molester, speaking not of even the damage you’re doing, but the risk. There is no worse life available to a human than being a caught child molester. And yet they still do it. Which from you can only really surmise that it must be really good. From their point of view! Not ours! From their point of view, it must be amazing for them to risk so much.”

CK also joked that because of his risque material, it would probably be his last time hosting “SNL.” But, if the studio audiences’ lively laughter and applause was any indication, CK will be back.

Unfortunately, his sketches were extremely tame by comparison. The edgiest bit featured CK as a Sprint employee who made fun of the way his manager, a stereotypical sassy black woman, talked. When the manager caught him, CK’s character pretended to actually talk that way just to keep his job and as a result, had to keep up the ruse for five years. Two shorts featuring CK as a tearful lumberjack also garnered big laughs.

Other sketches featured CK as a cobbler with overtly sexual elf employees, a man with a girlfriend with an annoying British accent and a member of an acting workshop in a police lineup.

CK’s final sketch of the night was a fictional “Forgotten TV Gems” show called “Whoops, I Married a Lesbian.”