It took Wes Anderson directing “Fantastic Mr. Fox” to make it clear that, with his love of dioramas and infinitely detailed set pieces, he’d been crafting animated movies all along, albeit usually with live-action casts. Similarly, “Love & Friendship” marks Whit Stillman‘s first screen adaptation of Jane Austen (or any other writer, for that matter), and his skill at crafting witty banter and portraying lovers constrained by etiquette and custom reveals that he’s always been making Jane Austen movies.

(Stillman tipped his hand as early as his debut feature, 1990’s “Metropolitan,” which featured its romantic leads disagreeing over the merits of Austen’s “Mansfield Park.”)

The world of his latest film, based on Austen’s short story “Lady Susan,” is centuries away from “Damsels in Distress” and “The Last Days of Disco,” but Kate Beckinsale and Chloe Sevigny spin intrigues, break hearts and flirt with scandal just as effectively in the 1790s setting of “Love” as they did in “Disco,” which took place in the early 1980s.

Beckinsale stars as the notorious Lady Susan Vernon, a widow reputed to be the biggest flirt in the British Isles. Over the course of the film, she will attempt to win the affections of the handsome Reginald DeCourcy (Xavier Samuel, “Fury”) — Reginald’s sister Catherine (Emma Greenwell, “Shameless”) married the brother of Lady Susan’s late husband.

At the same time, she pushes her own daughter, Frederica (Morfydd Clark, the upcoming “Pride and Prejudice and Zombies”), into a marriage with wealthy upper class twit Sir James Martin (Tom Bennett), all with the scheming assistance of American exile Mrs. Johnson (Sevigny).

Sir James, incidentally, is introduced as “a bit of a ‘rattle'” in the iris shot that Stillman uses to introduce the dozen or so major characters early in the film. This is the sort of movie that isn’t afraid to use the phrase “Dramatis Personae,” or to ask us to keep these aristocrats and their various relationships straight, but Stillman’s fleet and funny adaptation makes it a pleasure to follow these entanglements (and to understand the strict social rules regulating everyone’s behavior). 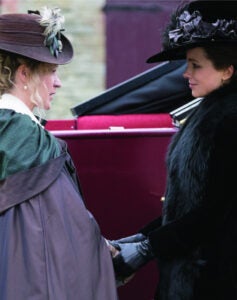 Given Beckinsale’s wicked facility with dialogue, tossing off bon mots like, “Facts are such horrid things,” who can blame Reginald for doing a full 180 on his opinion of Lady Susan, even when it’s clear to everyone else that she’s spinning webs all around him? One of Stillman’s trademark moves is to repeat a certain line or turn of phrase multiple times, with increasing hilarity, and here it’s Lady Susan discussing Sir James’ dimness in relation to the legendarily wise King Solomon.

Sir James, incidentally, is such a delightful idiot that Bennett steals every moment he has in the film, whether he’s dancing with irrational exuberance or miscounting the number of Biblical commandments. (He thinks there are 12, and when someone informs him that there are actually 10, he assumes that means we’re allowed to ignore two of them.)

Cinematographer Richard Van Oosterhout uses a great deal of natural light for both interiors and exteriors, making the salons and dressing rooms look vibrant and lived-in without ever betraying the period setting.

And one can only imagine the challenges faced by costume designer Eimer Ni Mhaoldomhnaigh (“The Wind That Shakes the Barley”): For all of Lady Susan’s concerns about money and appearances, she (and her partner in crime, Mrs. Johnson) wear one extraordinary dress and gorgeous hat after another.

In the same way that Stillman has brought the courtliness of another era to his modern stories, in “Love & Friendship” he puts a contemporary twist on venerable material, down to a third-act twist that suggests behavior that’s anything but chaste. Were she around today, Miss Austen would, I think, smile upon this adaptation. And then she might add the upcoming Blu-ray of Stillman’s “Barcelona” to her Amazon wish list.