Netflix has lined up a three-episode “Love Is Blind” reunion to give an update on the couples and singles from Season 1, the streamer announced Thursday.

Titled “Love Is Blind: After the Altar,” the three new episodes will see (almost) the entire Season 1 cast reconvene for an anniversary party to celebrate Amber and Barnett and Lauren and Cameron.

Per Netflix, “For three episodes, catch up with your favorite couples and singles as they settle back into their daily lives in Atlanta. How will Amber and Barnett feel about seeing Jessica? Will Diamond and Carlton ever make amends? Who might make a surprise appearance? And who won’t even show up for the party because of all the drama that’s happened in the past two years? Ultimately, when it comes to love, the experiment never ends.” 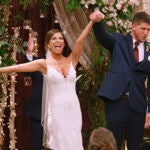 Also Read:
‘Love Is Blind’ Reunion: 7 Most Shocking Moments, From a Surprise Proposal to ‘B—, You’re Sheisty’

Season 1 of “Love Is Blind” was a hit for Netflix when it debuted last February, marking an early foray into the dating show genre for the streamer. Last year, Netflix renewed the show for two more seasons alongside “The Circle,” another of the streamer’s buzzy unscripted hits.

“After the Altar” is set to premiere on Wednesday, July 28 on Netflix. Chris Coelen, Ally Simpson, Eric Detwiler, Brent Gauches and Heather Crowe serve as executive producers on the series, which hails from Kinetic Content.