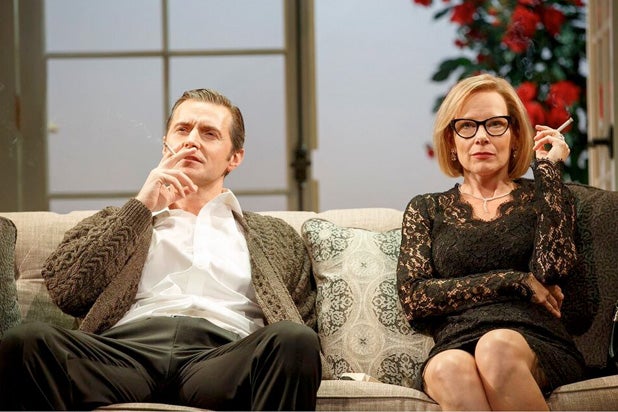 Give or take a couple of years, Richard Armitage goes from 20 to 40 to 60 in the course of Mike Bartlett’s new three-act comedy, “Love, Love, Love,” which opened Wednesday at Roundabout’s Off Broadway Laura Pels Theatre. It’s hard to say what’s more astounding — that Armitage (he plays Thorin Oakenshield in “The Hobbit” trilogy) is utterly convincing at each age in each act, or that someone has written a three-act play in an era of 80-minute divertissements?

Before you panic at having to endure some Eugene O’Neill marathon, “Love, Love, Love” comes in at just over two hours and it’s very funny. While there are two intermissions, they’re needed to establish three very different British interiors, each of which set designer Derek McLane renders in careful detail.

Armitage makes his New York stage debut, and he’s spectacular. His callow-but-always-charming Kenneth meets his future wife, Sandra (Amy Ryan), shortly after the Beatles have released their 1967 single “Love, Love, Love,” and they fall in love (more likely it’s lust) dancing to the tune in the apartment of his older brother, Henry (Alex Hurt), who’s dating Sandra at the time. Needless to say, we never see Henry again until act three, and then in a very different form.

“Love, Love, Love” tracks Kenneth and Sandra’s relationship with each other, as well as their two children (Zoe Kazan and an effectively unhinged Ben Rosenfield). It’s not inappropriate to compare Bartlett’s play with last season’s breakthrough “The Humans,” which also opened under the auspices of the Roundabout at the Pels Theatre.

Michael Mayer‘s direction is much bouncier than Joe Mantello’s staging of the Stephen Karam play. Ryan brings a real “Ab Fab” flair to Sandra. She’s not quite as successful as Armitage in playing the younger version of her character, but then he’s not required to answer to “bird” and wear a Mary Quant mini-dress knockoff (costumes by Susan Hilferty).

Mayer’s manic brand is much less effective with the introduction of Kazan’s teenage Rose in the second act. From the beginning, she should be the eye in this family storm, but her tragedy is played for broad laughs. When we meet her again at age 37 in act three, her situation doesn’t deliver the necessary resonance.

Bartlett is writing about Britain, not America, but his thesis that the aging flower children squandered everything and left nothing for their kids misses a generation. Those who came of age in the late 1960s inherited their parents’ wealth and then spent it.

While the Kazan character bemoans her parents’ generation (she delivers the play’s funniest line), it’s intriguing to compare Rose to the lead character in David Hare’s “Plenty,” now starring Rachel Weisz at the Public Theater. Susan Traherne, the age of what would be Rose’s grandparents, feels cheated by post-World War II Britain. In the end, every generation has something to bitch about.

Considering what happens to Kenneth and Sandra’s children in act three, “Love, Love, Love” is nearly as grim as Hare’s take on life (and maybe darker than even Karam’s). Mayer and Bartlett, to their credit, keep Kenneth and Sandra completely oblivious to that fact.