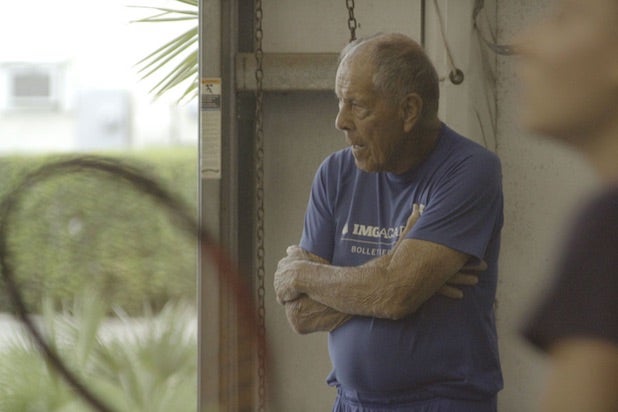 But while Courier, Boris Becker and others talk about the Bollettieri-Agassi bond in “Love Means Zero,” Agassi himself is conspicuously absent. Almost 25 years after Agassi lost at Wimbledon and Bollettieri subsequently ended their relationship by letter (after giving an interview to USA Today), Agassi declined to participate in the documentary.

That leaves an enormous hole at the heart of the film, though Kohn does his best to make this a movie that doesn’t need the absent Agassi. He does this by talking to others around Bollettieri, particularly his fellow coaches at the academy, and by structuring the film around a series of conversations between the director and his subject.

Not for nothing does this movie begin with the credit “Starring Nick Bollettieri.” Kohn tries hard to talk Bollettieri out of using his “performance voice,” but never really succeeds – so the film becomes a match, in which Kohn tries to get at his subject and a self-aware, protective and theatrical Bollettieri volleys everything back with frustrating equanimity or an even more frustrating insistence that he doesn’t remember.

Perched in a chair in front of the courts of what used to be his academy, the sun-baked 86-year-old coach holds court like an old, wrinkled orangutan, shooting down Kohn’s attempts at psychoanalysis and blocking every uncomfortable query:

Still, the director persists gamely; Bollettieri is never less than fascinating, and as the film goes on he seems to lose a few of his defenses and drop the self-justifying bluster just enough to give us glimmers of doubt and regret.

Also Read: 'Battle of the Sexes' Review: In a Hard Year for Women, Emma Stone Provides Reason to Cheer

The final credits to “Love Means Zero” point out that Andre has yet to respond.