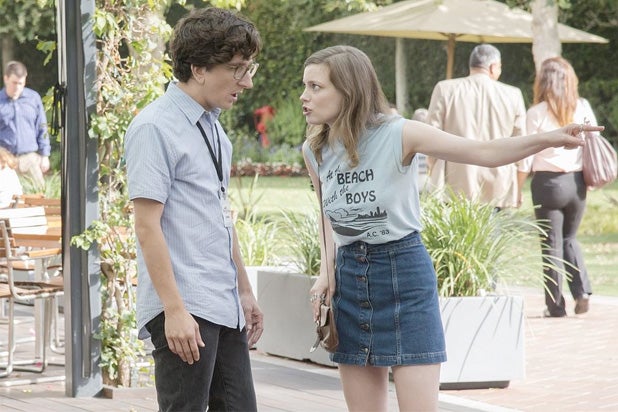 Judd Apatow has made a career out of chronicling love — how to find it, how to keep it, how to make sense of it — and so by naming his latest show “Love,” he’s clearly not deviating too far from a formula that’s been successful for him in both television and movies. And on its surface, this Netflix series (created by Apatow along with “Girls” staff writer Lesley Arfin and series costar Paul Rust) follows a familiar template, showing how a nerdy, insecure guy and a too-beautiful-for-him gal end up falling for one another.

But it’s in the small details where “Love” gets its hooks into you: This 10-episode first season is sometimes a little ragged and uncertain, but that’s very much in keeping with its characters, whose anxious ambivalence about the L-word might short circuit their chances of recognizing the potentially healthy romantic partner right in front of them.

“Love” cleverly opens with an episode that doesn’t feature our two leads together in the same scene until the very end, suggesting a cosmic connection between these seemingly disparate characters. Rust plays Gus, a 31-year-old child tutor who works on the set of a terrible-looking Freeform-style supernatural series involving witches.

He’s just been dumped by his longtime girlfriend, an act that’s mirrored in a sequence in which Mickey (Gillian Jacobs), a 32-year-old radio producer, breaks up with her cocaine-addled, on-again/off-again boyfriend. Gus and Mickey meet randomly at a convenience store — she forgot her wallet, he offers to pay after she makes a stink with the cashier — and the subsequent nine episodes revolve around their burgeoning friendship.

Because of its title and parallel-lives opening, “Love” encourages audiences to assume that Gus and Mickey are meant to be a couple. But by establishing that expectation early on, the writers (which include sitcom veterans such as Brent Forrester and Alexandra Rushfield) are able to explore all the reasons why these two actually shouldn’t be together. Far from an anti-romance, “Love” is more accurately an investigation into what happens when real people with real baggage give courtship another try, their hopes inextricably intertwined with their growing cynicism about the existence of true love.

In films like “The 40-Year-Old Virgin” and “Knocked Up,” Apatow has gotten plenty of comic mileage out of pairing a dweeb with a babe, and so it’s not initially novel that geeky nice guy Gus and caustic party girl Mickey start hanging out. But these two actors’ rapport helps erase their characters’ differences while simultaneously leaving us wonder if this will merely be a passing flirtation for Mickey. Gus may be a nerd, but his oddball sense of humor meshes well with her sarcastic sensibility, not to mention that she’s amused by his dorky demeanor — after the jerks she’s dated, there’s something refreshingly sweet about his self-consciousness.

Rust can sometimes overdo Gus’s manic awkwardness — it feels like an adrenalized variation of the typical sitcom nebbish — which explains why the character is far more appealing when he breaks out of that mold. Slowly, “Love” reveals different dimensions within Gus, who starts out as a go-along-to-get-along pushover who can’t believe that someone like Mickey would hang out with him. But Rust locates Gus’s wounded pride as well as his strange way of handling getting what he wants: There’s a wonderfully mysterious moment about halfway through the first season in which a silent, ambiguous reaction from Gus signals a tiny but significant shift in his feelings for Mickey.

Jacobs has the more complex role — or, at least, the one that’s more superficially dramatically complex. We’ll soon learn that it wasn’t an accident that Mickey had been dating a guy with a cocaine problem: One of the better elements of “Love’s” first season is its gradual reveal of the different addictions that have dogged this woman, darkening her worldview and leaving her feeling like she doesn’t deserve a good guy like Gus.

Treating Mickey’s dependencies with candor, “Love” nonetheless risks reducing the character to a damsel-in-distress cliché — the pretty girl with the afterschool-special demons — but Jacobs brings a grounded, matter-of-fact realism to the role, creating a believable obstacle that might keep Mickey from ever finding any sort of permanent happiness.

Delving into the darker thematic elements of “Love” means shortchanging how funny this show can be, but it’s a testament to the series’ emotional complexity that it can be enjoyed on several levels. (And the supporting cast, especially Claudia O’Doherty as Mickey’s bubbly roommate and Tracie Thoms as the no-nonsense showrunner on the program where Gus works, can be awfully delightful.)

Its portrait of perpetual Los Angeles dissatisfaction — of lives lived separated by cars, unreliable cell phones and hard-to-parse text messages — feels accurate without straining for topicality. Later episodes get bogged down in subplots that feel like busywork meant to keep our characters apart, and perhaps there aren’t any major revelations to this show’s look at dating in your 30s. But “Love’s” modest, hesitant misadventures are charming in their own right. Maybe it’s not quite love, but it’s definitely like.