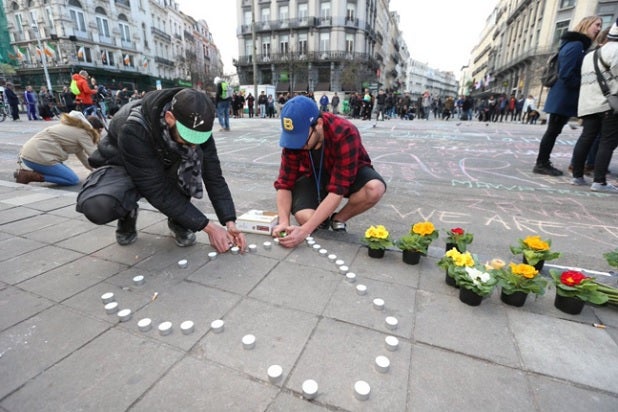 Celebrities took to social media to express their grief and sorrow in the wake of the deadly terrorist bombings in Brussels that left dozens dead.

“Our hearts today are full of grief, but tomorrow let them not be full of hate. That is what terror demands, and we shall not give it that victory,” George Takei wrote in a Facebook post.

Others like “The Office” alum Rainn Wilson, Ryan Seacrest, Ellen DeGeneres, and Amy Schumer sent their thoughts and prayers to those killed and wounded in the Belgian capitol.

Our hearts today are full of grief, but tomorrow let them not be full of hate. That is what terror demands, and we shall…

My heart goes out to everyone in Brussels! Praying for peace throughout the world.

Sending my love to the people of Brussels. My heart goes out to everyone touched by this.

my heart goes out to the people of #Brussels this morning

On this day, my heart goes out to all the people of Belgium. #PrayForBrussels pic.twitter.com/FQCfSE2vNG

Our hearts go out to those harmed in today’s attacks in Brussels and their loved ones.

The horrible attacks on #Brussels affect us all. My heart is with you #Brussels pic.twitter.com/3DNTQWAFg2

My thoughts and love go out to everyone in #Brussels, and around the world today. #prayforpeace pic.twitter.com/qRmmcgPnNE

Our love and prayers go to the people of Brussels. Please — pray for peace. #PrayersForBrussels pic.twitter.com/Fj6WcfHF0g

Sad to wake up to news of grotesque violence in Brussels. My thoughts are w the victims and families who have suffered.

Woke up to the horrible, tragic news in Brussels. Heartbreaking. Sending much love and many prayers.