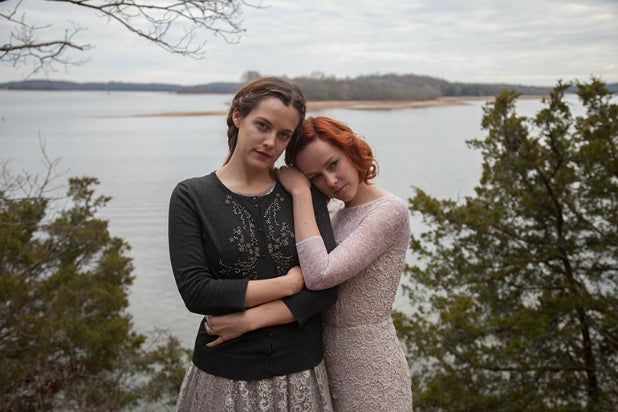 There’s a rodeo that takes place early in “Lovesong,” the latest feature from director So Yong Kim (“In Between Days”). There’s also a years-long dance of unrealized love between two young women. But this is no lesbian “Brokeback Mountain.”

The former detail is mostly incidental, and the love story — more pronounced longing than announced intent — is the quietly heartbreaking sort, depicted as more of a wishful dream than anything else. Of course, all of this suits Kim’s delicate objectives perfectly, and if there’s a cinematic cousin to this sensitive, sorrowful film, it’s “Moonlight.”

Sarah (Riley Keough) is a young mother to a typically rambunctious three-year-old daughter, and wife to a husband (filmmaker Cary Fukunaga) who Skypes in from a series of endless work trips. His perfunctory greetings ignore her loneliness and stress. To escape her routine, Sarah takes a short road trip to meet up with Mindy (Jena Malone).

See Video: 'Lovesong' Stars on Working With 'Master of Silence' So Yong Kim

Best friends in college, they fall back into easy affection: eating, drinking, the rodeo, flirtations with a cowboy, more drinking, and then a kiss that leads to spending the night together. The morning comes and Mindy leaves abruptly, just when Sarah finds herself open to, and needing, more.

The film’s second half involves, no surprise, Mindy’s wedding to a man (Ryan Eggold, “The Blacklist”) and the news that three years have passed since the women have spoken. Sarah, greeted by Mindy with a sincere, friendly, “So nice to see you,” and little else, attends the event but finds herself demoted from member of the wedding party to simple guest.

There are other friends and co-workers (Brooklyn Decker of “Grace and Frankie,” and director Amy Seimetz, “The Girlfriend Experience”) who need face time with the bride. There’s Mindy’s difficult mother (Rosanna Arquette) who needs to complain about everything and to grill her daughter about the very idea of marriage. There’s a rehearsal dinner and a bachelorette party, but there’s really no time for old friends to talk about love or separation or the possibilities of existence apart from the most convenient human choices. It’s a wonder they can communicate at all after Mindy delivers the passive conversation killer, “I don’t hear from you.”

Kim’s script, with co-writer, spouse, and fellow filmmaker Bradley Rust Gray (“Jack and Diane”) is spare. The dialogue feels as though it were at least partially improvised. There are incidents, and there are minimal conversations, but they matter much less than, and are in service to, Kim’s strongest talent: guiding actors in space. Working with cinematographers Kat Westergaard (“Go for Sisters”) and Guy Godfree (“Maudie”), she positions her women to fill the frame, often in close-up.

There are glances and nervous hands, longing gazes, and downcast faces needing explanation or consolation. Malone and Keough, perfectly cast and perfectly in sync as people who should be — but probably never will be — lovers, make sadness seem enticing.

And Kim knows that her characters aren’t doing anything especially new. The drift of adulthood happens to the best of friendships. But Malone and Keough give their characters’ actions a brokenhearted specificity that the script intentionally leaves blank. The movie also serves as a reminder, even in an American cultural moment that feels more solidly pro-LGBT than ever before, that everyday human beings, confronted with processing the uncertain pull of sexuality, are up for serious and destabilizing work. The world at large still operates under the assumption of heterosexuality, and conformity feels like the path of least resistance for these characters, even when actual physical evidence to the contrary is staring them in the face.

Kim’s not interested in tidy resolution, and has a strong affinity for missed connections between people who know each other very well. That’s the greatest strength of “Lovesong.” It understands that if a wedding is to be the last day of two almost-lovers’ acquaintance, then it should be one full of memorable regret.

The actress in Starz’s escort drama poses for pictures