It rained hard and steady on Saturday as a handful of friends gathered to remember Cathryn Jaymes, the unlikely Hollywood manager who – despite dozens of clients and four decades in the entertainment business– will probably be best remembered for having found and championed a motor-mouthed, unemployed actor, Quentin 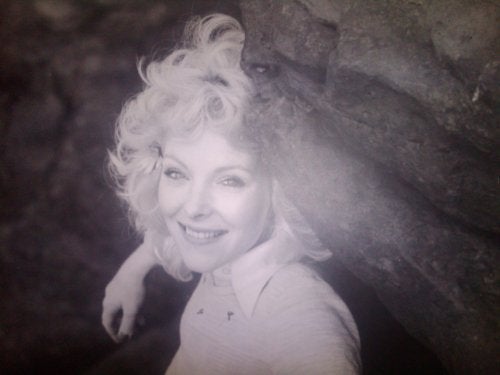 (Cathryn on her first meeting of Quentin: “I am certain you will be a major force in this industry.”)

But the people gathered on Saturday remembered her for a lot of other things. Firstly I was reminded how shockingly beautiful she was. (Jaymes started out as a model, and dated le tout Hollywood when she was in her 20s. Only later did she decide she preferred representing talent.)

In his eulogy at the Messiah Lutheran Church in North Hollywood, former client and devoted friend Craig Hamann called her “persistent, stubborn. She had integrity, honor.”

Jaymes “loved strays – she took in a lot of strays: four cats, three dogs, two guinea pigs and a bunny.”

The strays included many of her former clients, who came. They included the DoubleMint twins and Mark Dacascos, a kung fu artist and actor who has been ‘the chairman’ on Iron Chef America. Jeremy Ratchford, an actor on “Cold Case,” said he had dumped his agent after it took two weeks to get an appointment. He dropped his file off with Jaymes and her partner, and got a call from them within an hour.

“I’ve been working steadily ever since,” he said.

I frankly could never figure out how such a sweet soul got pulled into the cutthroat world of the entertainment industry. I guess it was because she really believed in talent, and decided that this was a cause worth fighting for.

She was unusual in the rough-and-tumble entertainment business – spiritual and without guile. Her work was her life; she was not married, and did not have children.

“She lived for us,” said Hamann,  who introduced Tarantino to Jaymes decades ago, but would not have invited him to the memorial. (See previous for the backstory.)

“She could be hurt. And nothing hurt her more than when one of her strays turned against her. It cut her to the heart. But she did not believe in vengeance, or in getting the last word in.”

Jaymes’ crusade of recent years had been to promote two writer-director brothers, Eshom and Ian Nelms, two still-struggling talents from Fresno. They had sought her out after reading (in my book, ‘Rebels on the Backlot’) about how passionately she championed Tarantino.  She told everyone within earshot that they were going to be huge.

And maybe they still will be.

The group gathered back at Jaymes’ house on Laurel Terrace. It was a certain slice of Hollywood – not the rich and famous but the working side, the folks pounding the boards, waiting for callbacks, working toward their big break.

Those lucky enough to have Jaymes as their manager knew, at least, that someone believed in them and was pushing on their behalf.  And as cancer slowly sapped her strength in the past year, they were by her side, (one flew in from Hong Kong just for this memorial) giving that loyalty back to the very last moment.

Cathryn died at peace. Not so the young girl who was brutally ripped from the arms of her family in a sudden car accident on Friday .

Julia Siegler was just 13, and barely old enough to have started her journey in life. She was hurrying to catch the schoolbus on Sunset Boulevard in Brentwood on Friday when she was clipped by one car, then struck fatally by a second. 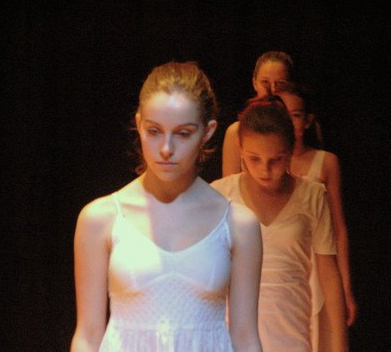 by shock and mourning over the loss.

At a makeshift memorial at the spot where she died on Sunset, people gathered on Saturday night in the rain to share their grief. A small mound was covered in flowers and surrounded by flickering candles. Friends and strangers both had lashed bouquets to the lamppost, where a pair of pointe shoes had been draped.

One is reminded to love life, and to grasp it with both hands for as long as it lasts. I didn’t know Julia Siegler, but I felt compelled to stop at the spot with my teenaged son on Saturday.  There was nothing to say, and nothing to feel but an aching mix of gratitude and regret.