(Warning: This post contains spoilers through the series finale of “Lucifer.”)

“Lucifer” star D.B. Woodside is proud that the Netflix fantasy series returned to the topic of Black Lives Matter and police brutality in its final season with an Amenadiel-centric episode that he believes finally tackled the issue “head on,” following a Season 4 attempt that he was “a little disappointed” with because it “danced around” the conversation.

“I’ve always said that [‘Lucifer’ showrunners] Joe [Henderson] and Ildy [Modrovich] are two of the nicest people I’ve ever encountered,” Woodside, who plays Lucifer’s (Tom Ellis) angel brother, Amenadiel, told TheWrap. “And they have always had kind of an open-door policy. This particular topic, for all the obvious reasons, is personal for me. Being a Black man, being someone that was abused by the police constantly from seven years old till I was in my late 20s. But this one was personal. And I don’t believe I’ve said this before, but they tried to tackle it a few seasons ago, I think in Season 4, and Claudia Yarmy, who I’ve talked about often as one of my favorite directors, and I thought she did an absolutely phenomenal job with that episode. And Claudia is back directing one of my favorite episodes for Season 6.

“But it’s a tough topic,” Woodside said. “And I’ll say this now publicly, since everything is over, I don’t feel like we did as good of a job tackling this issue in Season 4 as we could have. I thought that it was danced around a little bit. And that’s something that, when I look back on that, my heart aches a little bit that we didn’t tackle that more head on. I think this was a particular topic that scared people, for all the obvious reasons. But it is a topic that we really need to tackle and we really need to talk about. And having fear talking about it should be included in the conversation. And it shouldn’t be something that just because people are afraid to talk about this particular topic, the police brutality towards Black men, towards Black women, towards brown men, towards brown women, this shouldn’t be a topic that we shy away from. So I was a little disappointed that we didn’t tackle it as hard as I wanted to back then.” 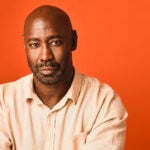 The episode in question is Season 4’s “Super Bad Boyfriend,” which was directed by Claudia Yarmy and written by Jason Ning, and it featured Amenadiel trying to help a troubled youth who had run-ins with the law. Woodside said that Episode 606, “A Lot Dirtier Than That,” which launched Friday along with the rest of the final season, actually does the topics of racial profiling and police brutality justice by showing Amenadiel in his first days on the job as a beat cop with his Black partner, played by Merrin Dungey, and his attempts to change the broken system that has put racist police officers in power at the top of the LAPD.

“But this season we do tackle it,” Woodside said. “And I thought Ildy did a great job writing it and Claudia, of course, like I said, is an absolutely spectacular director. And to be able to do something like this with Merrin Dungey, who is someone that I’ve admired for many years, I love her work, I think she’s a fantastic actress and just a great person. I mean, I love working with Merrin and I honestly, I really hope Merrin and do something else past this. But I feel like we tackled the topic head on this season. They were open to hearing what I had to say. And there were, I think, one or two things in the original version of the script that really didn’t feel right to me. And I addressed it with Ildy and she was open and she changed it. So I’m really excited for people to take a look at what we do with this particular subject this season, specifically in the episode that Claudia has directed. I’m going to be interested to hear people’s feedback.”

Amenadiel brings his concerns to Chloe (Lauren German) and the two make a plan to work together to change the force from the inside out. That arduous task becomes somewhat easier at the end of the season, when Lucifer decides he’s not up for the task of being God after all, and Amenadiel realizes that is really the role he was born to fill.

“I think Amenadiel was created for this position,” Woodside said. “He’s always been the most revered angel. I think his heart has always been in the right place. He, for sure, has not always done the right thing. But I do believe that his heart has always been in the right place. And I think it’s one of those things where just like normal people, there’s a family business, and if you’ve grown up as a kid in that family business, even though that family business might be perfect for you and play to all your strengths, you still want to go out there and and pave your own way. You want to make your own way out in the world, and you want to leave a mark. And I think what happens sometimes is, after you do that, you realize that what’s best for you is to go back to the family business and that once you realize that you could possibly run the family business your way, then it becomes it becomes enticing.

“So I think Amenadiel has really enjoyed being on Earth,” Woodside added. “I think he’s really enjoyed his friendships with Dan, with Linda, and, of course, being a dad. I think he learns that he can do more good for the world, in fact, by being God and and running the family business, as it were, differently then than his dad. And I think once he makes that realization, with a wonderful assist from Chloe, once he makes that realization, I don’t think he sees anything else. I think he feels that this is what he has a calling for. And this is something that he would be great at doing. And so I think he just embraces it and runs with it.”

Amenadiel decides to handle the gig as the big man differently from his father, being a God who sees himself as equal to his angels and spends a significant amount of time on Earth, especially with Dr. Linda (Rachael Harris) and their son, Charlie. A fun little surprise comes for Amenadiel during one of his trips to see Charlie in the finale’s closing montage, when he sees his little man, whom he and Linda thought was mortal, actually has angelic traits.

“I absolutely loved that (laughs),” Woodside said. “We all have our children, I have a wonderful daughter, she’s 11… I feel like she’s 11 getting ready to turn 45. But I had this dream when she was 5 or 6, I so wanted her to play soccer. I was pushing soccer and I just wanted her to play soccer. And it was just something that she was not interested in. So I get that parent thing where if there’s a particular sport or activity or interest that you love, you want to be able to share that with your children. And so I think that sometimes when we can push on something so much and they just don’t have a natural inclination towards it, it can be depressing. But if they do, if they do, it’s just like your world has changed. And so I think for Amenadiel, he would have been just fine if Charlie wound up being a mortal, because he’s been living with it for a while, he worked through it emotionally. He accepted his son for who he was and who he was going to be. And then at that very moment, he gets exactly what he wanted. Oh, my God. You know, he’s on top of the world. It’s fantastic for him.”

Check back with TheWrap throughout the weekend for more “Lucifer” final season coverage.