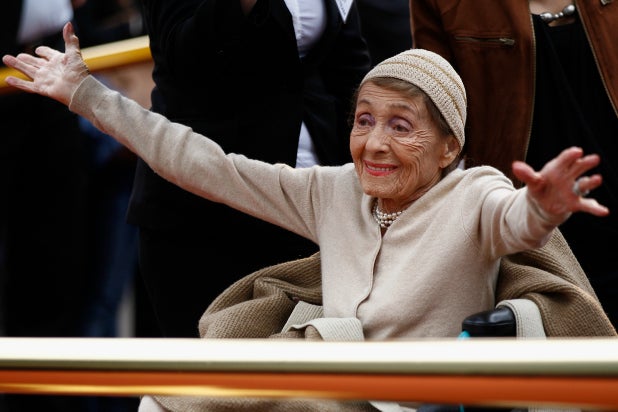 Luise Rainer, the first person to win back-to-back Academy Awards, died on Tuesday of pneumonia. She was 104.

Rainer took home the top actress trophies in 1936 and 1937 for her roles on “The Great Ziegfeld” and “The Good Earth,” respectively. Only four other actors have since match that feat.

Rainer closed out her brief Hollywood film career with “Hostages” in 1943, and spent most of her later life in England. She made the occasional film and TV appearances, including on a 1984 episode of “The Love Boat.” One of her last film roles was in the 1998 Fyodor Dostoyevsky adaptation, “The Gambler.”

“She was bigger than life and can charm the birds out of the trees,” her only daughter, Francesca Knittel-Bowyer, told the Associated Press. “If you saw her, you’d never forget her.”

Rainer, who was discovered by a talent scout from Metro-Goldwyn-Mayer in the mid 1930s, is also survived by two granddaughters.

Rainer, who was born on Jan. 12, 1910, believed that her early success ultimately led to the demise of her career.

“When I got two Oscars, they thought, ‘Oh, they can throw me into anything,'” Rainer told the AP in a 1999 interview.

“I had a seven-year contract that I broke and went away,” Rainer continued. “I was a machine, practically, a tool in a big, big factory, and I could not do anything. I wanted to film ‘Madame Curie,’ but Mayer forbade me. I wanted to do ‘For Whom the Bell Tolls,’ but (producer David O.) Selznick took Ingrid Bergman and brought her to (Ernest) Hemingway and I didn’t know Hemingway.

The actress was equally outspoken about the simultaneous dissatisfaction in her personal life. At the peak of her professional success, Rainer was in an unhappy marriage with American playwright Clifford Odets. They divorced after just three years.