Prokop, 19, made his announcement on Twitter, saying, “Today I am proud to publicly tell everyone that I am gay.”

His post continued: “It has been quite the journey to get to this point in my life, but I could not be happier with my decision to come out. From a young age I have dreamed of being an NHL player, and I believe that living my authentic life will allow me to bring my whole self to the rink and improve my chances of fulfilling my dreams.” 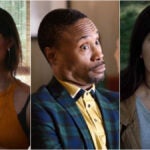 The Canadian athlete also thanked his family and friends for their support, and shared his wish to make hockey a more inclusive sport.

“I hope that in sharing who I am I can help other people see that gay people are welcome in the hockey community, as we work to make sure that hockey truly is for everyone,” he concluded.

NHL Commissioner Gary Bettman applauded Prokop’s decision to come out in his own statement on social media.

“We pledge to do everything possible to ensure that Luke’s experience is a welcoming and affirmative one and continue to work to ensure that any current or future NHL Player contemplating following in his trailblazing footsteps knows our League is ready to provide full support,” Bettman said.

Prokop’s announcement comes a month after Las Vegas Raiders defensive end Carl Nassib came out as gay and became the first active player in the NFL to come out while playing. NFL Commissioner Roger Goodell subsequently commended Nassib for “sharing his truth.”