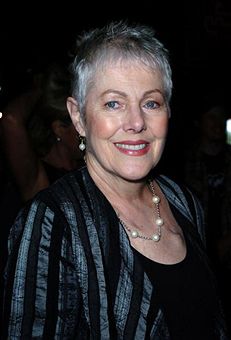 Lynn Redgrave, the film, TV and theater actress and member of the Redgrave acting clan, has died. She was 67.

She died Sunday night at her home in Kent, Conn., with her three children and several close friends by her side, her publicist Rick Miramontez confirmed to TheWrap. A cause of death was not given, but she had been battling breast cancer for many years.

Among Redgrave’s best known roles were the lead in the 1966 British film "Georgy Girl," which launched her career, and her supporting role in Bill Condon’s 1998 drama "Gods and Monsters." She received Oscar nominations for both performances.

Her family released the following statement: “Our beloved mother Lynn Rachel passed away peacefully after a seven-year journey with breast cancer. She lived, loved and worked harder than ever before. The endless memories she created as a mother, grandmother, writer, actor and friend will sustain us for the rest of our lives. Our entire family asks for privacy through this difficult time.”

Redgrave was a member of one of England’s greatest acting dynasties. Both of her parents, Michael Redgrave and Rachel Kempson, were among the country’s greatest Shakespearean actors and they racked up a series of notable television and film performances between them. Her sister is the Academy Award-winning actress Vanessa Redgrave, and her nieces, Joely Richardson and the late Natasha Richardson, also drew acclaim for their stage and film appearances. Brother Corin Redgrave, a veteran actor himself, died last month.

Following in the family tradition, Redgrave made her theatrical debut in a 1967 production of "A Midsummer Night’s Dream" with the Royal Shakespeare Company. From there she racked up an impressive list of theater credits on London’s West End, appearing in works such as "Mother Courage" and "Much Ado About Nothing" for directors including Noel Coward and Laurence Olivier.

But it was her star-making performance as the frumpy title character in Silvio Narizzano’s "Georgy Girl" that truly made her a household name. Matched with screen veteran James Mason and stage great Alan Bates, Redgrave more than held her own in the poignant and funny film. Part of the "kitchen sink" school of drama, "Georgy Girl’s" sexual frankness and performances helped it attract an international audience and a handful of Oscar nominations.

Yet Redgrave largely failed to capitalize on that early cinematic triumph, preferring the stage to the screen. Over the ensuing decades, Redgrave etched a number of award-winning theater performances, including Tony-nominated roles in "Mrs. Warren’s Profession," "The Constant Wife" and her own solo show, "Shakespeare for My Father."

Though their relationship was occasionally strained, Redgrave appeared with her more famous sister Vanessa in a 1991 London stage production of "Three Sisters" and in a made-for-TV movie of "Whatever Happened to Baby Jane" that same year.

In the 1990s, Redgrave came roaring back to screens with performances in "Shine," "Spider" and her Oscar-nominated turn as a sympathetic German maid in "Gods and Monsters," reminding film audiences of the uncompromising talent who had first captured their attention three decades before.

But in the midst of this career resurgence, Redgrave’s personal life got caught up in the tabloids. Her husband of 32 years, John Clark, fathered a child with their son Benjamin’s future wife.

Redgrave also struggled with weight issues for many years, publicly admitting to battling bulimia and ultimately serving as a spokeswoman for Weight Watchers.

After she was diagnosed with breast cancer, Redgrave wrote a 2004 book about her struggles with the disease called "Journal: A Mother and Daughter’s Recovery From Breast Cancer," which she co-wrote with her daughter Annabel Clark.

Redgrave is survived by her three children, Ben, Pema and Annabe, six grandchildren, her sister Vanessa, and four nieces and nephews.

The family said a private funeral will be held later this week.