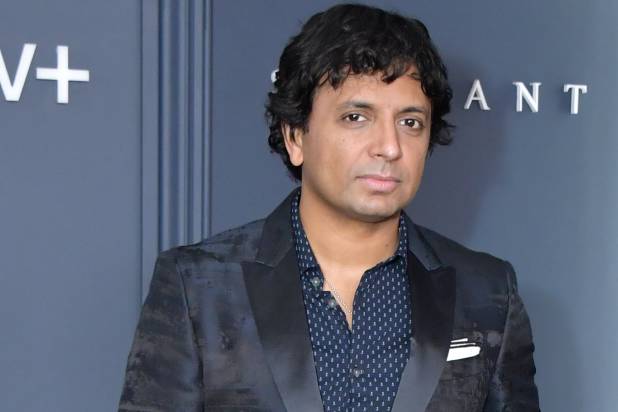 M. Night Shyamalan revealed over the weekend that production has begun on his latest film at Universal, and he also unveiled the title and first poster for his latest: “Old.”

Shyamalan’s follow-up to “Split” and “Glass” stars Gael García Bernal, Eliza Scanlen, Thomasin McKenzie, Alex Wolff, Aaron Pierre and Vicky Krieps. The silhouette poster, which calls the film “a new trip,” shows an hour glass, but instead of sand falling, it’s people. And the tagline goes, “It’s only a matter of time.”

“Feels like a miracle that I am standing here shooting the first shot of my new film,” Shyamalan said on Saturday morning.

Plot details have been kept under wraps for “Old” since the project was announced, but Collider reported last week that the film is inspired by the French graphic novel “Sandcastle” by Pierre Oscar Levy and artist Frederik Peeters. The book tells the story of 13 people who are stuck on a mysterious beach that holds a dark secret involving time after discovering a dead body floating in the crystal clear water.

Universal originally intended to release “Old” theatrically in February 2021, but the film has been pushed back to July due to COVID-19-related delays in production.

Shyamalan last week revealed that production had resumed on the second season of his Apple TV+ series “Servant,” which is being done with proper safety protocols and had four episodes left to shoot.

See the poster and title for Shyamalan’s “Old” below:

Feels like a miracle that I am standing here shooting the first shot of my new film. It's called Old. #OldMovie @OldTheMovie pic.twitter.com/hth8jUum8K