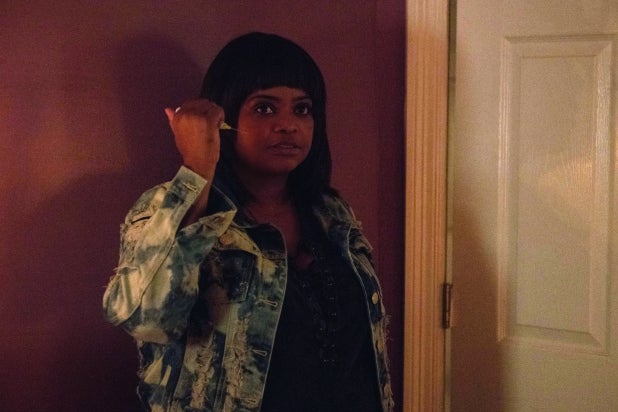 Every year on the first Monday of May, the Met Gala takes place in New York City, and the crème de la crème of the fashion world and Hollywood dress to the nines in whatever that year’s theme may be. This year the theme was camp, and A-listers presented what they believed was camp — and out of all the photos that came out of the event, only a handful actually seemed to understand the concept.

The rest? Trying too hard, bland, or just plain lost. The exact same thing could be said of “Ma,” director Tate Taylor’s latest film, which attempts to be a campy psychological thriller but gets so lost in trying to construct a message that all the exaggerated thrills die before even lifting off.

When Maggie (Diana Silvers, “Booksmart”) and her mom Erica (Juliette Lewis) move back to Erica’s hometown in rural Ohio, Maggie instantly connects with a group of kids in her new school. On the first night Maggie hangs out with her new friends, they take turns trying to get an adult to buy them alcohol from the local liquor store, and Sue Ann (Octavia Spencer), a lonely vet tech, decides to help them out.

Soon, Sue Ann isn’t just buying the kids booze; she starts throwing alcohol-fueled parties in her basement for Maggie, her friends, and even more kids from school, taking on the nickname of “Ma.” Maggie and company start to pull away from Ma after she starts sending them all repeated text messages and videos in a way that’s far too creepy and overly familiar. But Ma has some secrets from her past, and once she starts to unravel, no one is safe.

“Ma” had a chance to be a fantastic campy thriller. The script practically screams “THIS IS CAMP” on every page, with Taylor (“The Help”) and writer Scotty Landes (“Workaholics”) hitting that exaggerated tone often. But then, as if second-guessing themselves, Taylor and Landes lose their way by pivoting to a poorly executed attempt to create some sort of statement about one woman’s mental illness as a result of a trauma.

It’s not that men can’t necessarily write a woman’s journey through trauma, but neither Taylor or Landes seem prepared to deal with it beyond a two-step process: She gets weird, and then she snaps. It felt very similar to how the “Game of Thrones” creators swiftly tried to take Daenerys Targaryen the survivor to Dany the “Mad Queen” when there are better, more fleshed out ways to detail a woman’s descent into madness.

The history of depicting mental illness in horror films — particularly for women — is almost as old as the genre itself, but as of late, filmmakers are taking more nuanced creative approaches. Last year’s “Hereditary” is a great example of how to use mental illness to create a feeling of despair and terror, but it took care not to make a villain out of either the disease or the person suffering from it. “Ma” doesn’t spend enough time trying to understand those complex layers. While the film doesn’t spell out that Sue Ann is suffering from a mental illness, it suggests it to varying degrees in several scenes. People living with a mental illness are not necessarily dangerous, and they definitely don’t all decide to just start killing people one day.

Octavia Spencer gives more than she gets from the film; what she can communicate with just her eyes, or a tiny muscle shift in a smile, is sheer artistry. Spencer knows this character inside and out — and that Sue Ann is an outrageous representation of a killer — and she uses that knowledge in her facial expressions and physicality to craft a character you just want to keep your eyes on the whole time. Silvers is another standout, embodying a more modern version of a final girl with poise and aplomb. She’s believable as a doe-eyed new kid but equally tough as the daughter of a single mother. Without Spencer and Silvers, the entire film would fall apart.

The production design itself also lends an aura of campiness, with a few set pieces that are aching to be defined further, but neither production designer Marc Fisichella (“The Maze Runner”) nor Taylor choose to address them. Personally, I see set pieces as some chefs see a food plate; everything must be edible and must complement the meal. Pieces in a scene or sequence are necessary to tell the story further or to define a character, and yet several items here seem to have importance but being forgotten completely. A fate that will probably extend to “Ma” itself.