Six months after the unexpected death of Chadwick Boseman, the “Black Panther” actor has won multiple critics awards, a Golden Globe nomination and emerged as a shoo-in for an Oscar nomination for his great final performance as a sly, cocky trumpeter in “Ma Rainey’s Black Bottom.” Audiences have been able to watch the film, co-starring Viola Davis in a ferocious performance as the title character, now available to stream on Netflix.

But the role was especially memorable for the first pair of eyes that actually viewed it.

Cinematographer Tobias Schliessler (“Dreamgirls,” “Beauty and the Beast,” “Friday Night Lights”) was on the Pittsburgh set during director George C. Wolfe’s 30-day shoot in the summer of 2019. In an interview with TheWrap, Schliessler talked about his experience capturing Boseman’s performance on camera for the August Wilson adaptation. And in a wide-ranging conversation, the cinematographer, who was born in Germany but makes his home in Los Angeles, revealed why his collaboration with Boseman continues to inspire his own life and career.

You shot Bill Condon’s “Dreamgirls” in 2006. Is there any connection between these two films, both stage adaptations with Black casts and a musical backdrop?

Well, in some way there is, because George C. Wolfe came to visit the set of “Dreamgirls” one day and we had a brief introduction. But no, they are very different projects. I had I loved “Fences,” which Denzel (Washington) directed, and I had worked with him on “The Taking of Pelham 123.”

Did you have any concerns after reading the script? Much of the story only takes place in a few locations.
I was concerned about the small band room, which is about 18 by 22 feet big. How would we move the actors in that room? But then George told me: “Think of it as a boxing ring.” That’s how he conceived it. Brilliant. George would come onto set an hour before everyone else in the morning, just to think about the blocking. He thought of invisible poles in all four corners of the room. And in the movie, you’ll notice each character has his own corner that they come from.

Chadwick Boseman delivers an incredible monologue in that room. Did you have a strategy to best capture it?
George did not want to interrupt Chadwick, so we placed two cameras that would literally film him throughout. And those two angles were 90% of the footage we used, minus a couple of cutaways. It was like a ballet between the actor and the camera.

But your work is quite restrained, in terms of the camera.
That was the main thing for George. He said, “I don’t want the audience to ever wonder who is the talent behind the camera.” Of course, I like a bit of cleverness with the camerawork, but I completely agreed with George. I think that’s important for August Wilson’s words too, to let the performances breathe. 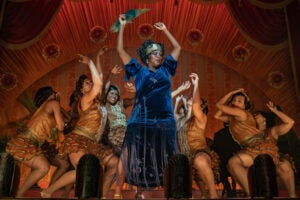 The film is set in 1927 Chicago. Were there any particular tricks to evoking the period of time through the camera?
It’s interesting, because I spent some time testing vintage lenses, but when I showed everything to George, he picked the more modern lens. He just didn’t want the audiences to be distracted by such things. He wanted the actors to be featured in a lot of closeups, so it was important not to distort their faces in any way.

It’s a film of sweltering heat. Is there a challenge to photographing sweat?
Well, we had amazing makeup and hair artists. And the incredible costume designer Ann Roth, who was 88 when we made this. Some of her costumes are so big and thick that I would sweat just by looking at them. I used something called Glimmerglass, a lens filter which kind of highlights the sweat. But it softens the reflection of the light on the sweat, while also bringing some warmth.

There is also a very powerful monologue by the actor Glynn Turman, who plays the pianist Toledo.
Oh, what an amazing scene. I don’t know if audiences realize this, but that’s the most theatrical moment in the film. George wanted to isolate him at that moment, so we stripped the whole room empty.  It starts with him in a closeup, the other men are in the room with him, and there’s a little bit of light. We referenced Caravaggio paintings for this.

So as the monologue goes on he’s actually sitting by himself in the room?
Exactly. You might not notice it, and that’s OK too. I didn’t read it that way in the script. But this is George’s genius, his ability to create a mood in that room with subtle touches, combining some of the theatrical experience and some of the cinematic experience.

How involved were you with the two lead actors, like in a day-to-day sense?
I really try not to interfere with the actors too much. Once they’ve gotten into their character, I want to stay out of their way. But if my lighting is slightly off, Viola knows it. She such a pro, so I can look over to her and just get a nod or a glance from her. Great actors are so aware of what’s going on around them.

It was interesting with Chadwick. As with Viola, he got so into his character that there was hardly any interaction between myself and him. There wasn’t much small talk. But then when we wrapped the movie, it was 3 o’clock in the morning and we did the last shot with him. I will always remember this. Everyone was giving handshakes and congratulating each other on finishing the film. And I see Chadwick is looking at me and he comes walking towards me and gives me a big hug. And he was mentioning, specifically, a few things I’d done that he liked. He was aware of everything all the time.

He is actually quite robust and energetic in the film, but of course there’s also a sense of melancholy because he’s now gone. How did it feel when you got the news?
Oh, my God. Heartbroken. Heartbroken because, for me, watching him work was such an inspiration. There were times while making the movie that I cried as we were filming his performance, from behind my monitor, because it was so touching. And then to know what he went through with his illness. I didn’t know at the time. Can you imagine, to get yourself into the emotional space for those scenes? How exhausting that much have been for Chadwick.

Do you think you’ll carry your experience with him into future films?
I already do. I’m working on project now and I’m thinking about how much he loved his work. I’ve been doing this for a long time but I still love going to work every day, and I love it even more when I think about Chadwick. It’s such an inspiration. It has its own life, this movie, and I’m so happy that we can keep him with us through his performance in it.