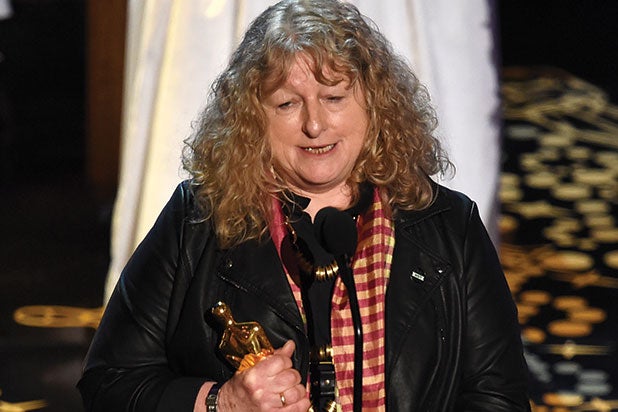 And she had a simple explanation for it.

“I really don’t do frocks, and I absolutely don’t do heels. I simply can’t wear them. I’ve got a bad back,” she told the media in the backstage press room at the Oscars. “I look ridiculous in a beautiful gown, and this was an homage to ‘Mad Max.'”

The “homage” to “Max Max” could be seen on Beavan’s leather jacket: The back of it was adorned with the skull logo often seen in the film.

“I’m actually in Marks & Spencer’s,” she added, referring to the famous British department store. “I just like feeling comfortable. And I’m sorry — as far as I’m concerned, I’m really dressed up.”

Beavan won her second Academy Award on Sunday. She previously won the Best Costume Design award for 1986’s “A Room With a View” and has been nominated 10 times in all.