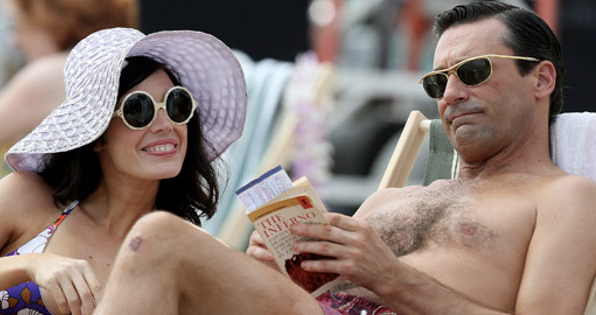 "Mad Men" began its sixth and possibly best season with Don Draper reading "Dante's Inferno" – and ended Sunday with him trying to stop some of the sins that lead to its nine circles.

The inferno punishes according to the degree of a person's sin – and Don's sins this season would easily land him in the ninth. But in the season finale, he began to pull back from the life he's created, and to admit to the hellish one he was born into. The episode's final scene found him showing his children the dilapidated former "whore house" where he grew up as the orphaned Dick Whitman. Don looks to his daughter, Sally, who has begun to imitate his penchant for drunkenness and using a fake name.

His look doesn't ask her to forgive him for keeping his latest dirty secret – an affair with his neighbor – but it does seem to ask her to understand why he is the way he is.

Even as Don peels back the mask, he is being out out-Don Drapered by Bob Benson, the total fraud Pete Campbell describes as an "accomplice to murder" after his friend Manolo apparently married Pete's mother and pushed her from a cruise ship. We learned last episode that Benson once served as a manservant to a senior vice president who took him across the Atlantic on another pleasure cruise. We wonder: How long have they fantasized about pushing someone over the railing?

There's little question that Manolo's motive was financial: As Bob has told us repeatedly, he doesn’t like women. But we know, as Manolo didn't, that Pete's mother was broke. In the finale's one unlikely scene, Pete and his brother convince themselves that Manolo will slink away once he learns no fortune awaits him – and both seem willing to let that happen.

Bob also manages to get Pete kicked off the Chevy account by revealing Pete's own dark secret: He can't drive. As Bob's machinations lead to humiliation and even a connection to a murder, we see that he is reaching levels of manipulation that even Don hasn't matched.

Also read: How 'Mad Men's' Perfect Peggy Got Down and Dirty for 'Top of the Lake'

But Don may be winning at another game: Staying out of hell's hottest circles. Here are the levels of the inferno, and which "Mad Men" characters Dante might place within them:

First Circle (Limbo): The domain of the unbaptized and virtuous pagans. Lots of "Mad Men" characters are unbaptized, but are any really virtuous? This seems like only the domain of babies and children. Maybe Dante would place Dr. Rosen and Michael Ginsburg here just for not being Christian. But elsewhere he encounters two virtuous non-Christians in Heaven. If Ginsburg and especially Rosen don't deserve a happy afterlife, we don't know who does.

Second Circle (Lust): I'm hard-pressed to think of a "Mad Men" character who doesn’t lust – again, with the exception of babies, children, Rosen, Ginsburg and Burt Peterson. Although Benson seems more driven by opportunism than lust.

Third Circle (Gluttony): Again. Since gluttony includes booze, nearly anyone on the show could end up here – except kids, Rosen, Ginsburg and Benson. Pete, Burt, Joan, Trudy and several secondary characters also seem okay on the gluttony front. (Actually, Trudy seems safe on every front. You blew it, Pete.) In the season finale, Don also seemed to be forswearing drunkenness. We'll see how that goes.

Fourth Circle (Greed): Since most "Mad Men" characters are financially secure, they seem driven more by a desire for power than for money. But that's still greed. And the power they desire is usually the power to keep others from challenging them. Don is greedy in his desire to keep Ted from taking over his control of the agency, which doesn't work out in the finale: He is asked to take an indefinite leave, just as poor pants-wetting Freddy Rumsen was asked to do in Season 2. And when last we saw Peggy, she was sitting in Don's office chair, perhaps planning a redesign.

But in Don's favor, he seems to have deliberately sabotaged himself by delivering Hershey perhaps the most awkward pitch in the history of advertising. He may also have redeemed himself a bit by unselfishly letting Ted go to California.

Fifth Circle (Anger): This could be a lot of people. Don gets angry at Ted, who gets angry at Don. Peggy is also angry at Ted. Sally is very, very angry at Don. So, probably, is Megan. Pete is understandably angry at Bob, but is it really a sin to be mad at an "accomplice to murder," or a cheating father? Really Dante? (We never said the Inferno was a perfect system.)

Sixth Circle (Heresy): Almost everyone on "Mad Men" is guilty of thinking outside orthodoxy. That's what they're paid to do. You know who else thought outside the accepted orthodoxy? Jesus Christ. Again, not a perfect system.

Seventh Circle (Violence): Not many on "Mad Men" are violent – except for Don, who, okay, punched a minister, and Manolo, who pitched an old lady off a ship. Don also got in a pathetic fight a while back with Duck Phillips, who is apparently helping replace Don at Sterling Cooper & Partners. I'm pretty sure Don would prefer the seventh circle of hell, where he would probably be in the outer ring reserved for those who hurt other people and property. But honestly, I don't think Don has a consistent enough history of violence to end up there.

Ninth Circle (Treachery): We're well accustomed to Don's lust, gluttony, greed, anger, heresy, occasional violence and fraud. What made him truly despicable this season was his treachery. Rosen is perhaps the best human being on "Mad Men" – remember his skiing to the hospital to perform heart surgery? – and Don had an affair with his wife. (It was good Catholic Sylvia Rosen, in fact, who told Don to read "The Inferno.")

Don may have tried to set things right by getting the Rosens' son out of Vietnam, but Don committed another betrayal in the process: Ted pulled some strings on Don's behalf to get the boy into the Air National Guard, and Don in turn shook Ted's hand and agreed to work together. But he quickly betrayed Ted by pursuing the Sunkist account, once he realized Ted's interest in Peggy.

The Sunkist account may also have given Don a chance to another make-good, however, since Don agreed to let Ted to go to California to handle it.

Does this get Don out of the Ninth Circle? We have one season to go.