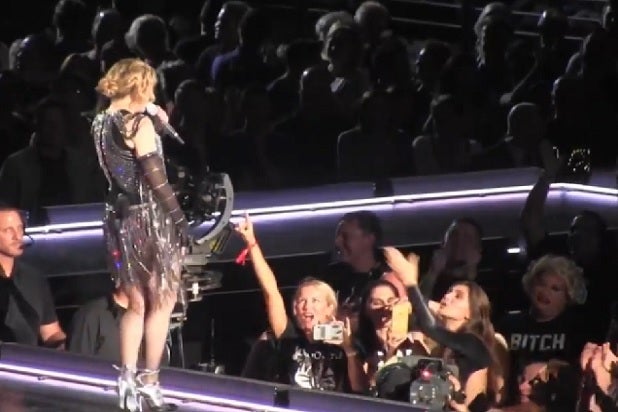 The 17-year-old girl whose breast was exposed at Madonna‘s concert in Brisbane last week paid another visit to the Material Mom during the singer’s concert in Sydney.

This time, she kept her top in place.

Josephine Georgiou, who made headlines and probably more than a few fans when Madonna tugged at her top onstage, exposing her breast, enjoyed primo seats with her mom at the Sydney show, TMZ reports.

Also Read: WTF Is Up With Madonna? A Short Explainer

A video from the Sydney show published by TMZ shows the “Like a Virgin” singer sharing a few sweet words with Georgiou and asserting that she “accidentally” exposed the fan’s breast.

After which, Madge turned her back and tossed a bouquet of flowers into the crowd. And wouldn’t you know it? Georgiou caught the bouquet. Which doesn’t seem contrived at all, so stop saying that.

Clearly there are no hard feelings over last week’s incident — at least between Madonna and Georgiou. In an interview following last week’s public overexposure, the Australian teen characterized the encounter as “the best moment of my life.”