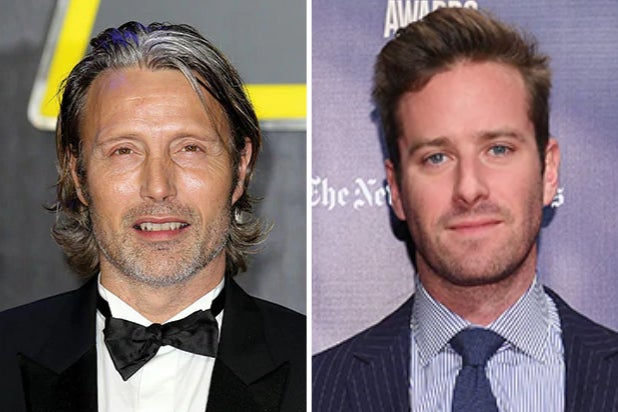 Mads Mikkelsen and Armie Hammer are set to star in “The Billion Dollar Spy,” a Cold War-era thriller that will be directed by Amma Asante, who is the director of 2013’s “Belle” and has made episodes of “The Handmaid’s Tale” and “Mrs. America.”

“The Billion Dollar Spy” is based on a true story of a Soviet engineer and his CIA handler who risked their lives to help bring an end to the Cold War. Hammer plays a CIA agent who has just arrived in Moscow and forms a friendship with an engineer played by Mikkelsen despite his bosses’ warnings that the man is a “dangle” by the KGB. His persistence is rewarded when the engineer produces a treasure trove of secrets that can turn the tide, only to put their personal lives in danger.

“The Billion Dollar Spy” was developed and produced by Walden Media and is produced by Akiva Goldsman and Greg Lessans through Weed Road Pictures. The film will go into production 2021 in Eastern Europe.

HanWay Films has come on board to handle international sales and distribution and will present the film to buyers at the upcoming American Film Market. CAA Media Finance and Endeavor Content will oversee the U.S sale.

David E. Hoffman, a Pulitzer Prize winner and American journalist, drew on previously classified CIA documents and interviews with first-hand participants, and his research was then adapted for the screen by Benjamin August. Hoffman found that the engineer, Adolf Tolkachev, was an asset to the CIA for almost a decade and that he provided plans, specifications and test results on planned Soviet aircraft and missiles, saving the U.S. government billions of dollars in defense expenditures. Some intelligence historians have called him “the greatest spy since Penkovsky,” and his portrait still hangs at CIA headquarters with his spy camera in hand. The film’s title is inspired by Tolkachev’s eventual nickname, “The Billion Dollar Spy.”

“We are incredibly excited to take on this cold war thriller, a departure from Walden’s usual cannon, to bring this mysterious world to life. We are honoured to work with talents Mads Mikkelsen and Armie Hammer with Amma Asante at the helm, on a story that showcases how one person can change the world” Frank Smith, president/CEO of Walden Media, said in a statement.

“August has brilliantly mined Hoffman’s detailed account of the Billion Dollar Spy and delivered a screenplay that will thrill all the fans of analog spycraft. At the same time we are going to inhabit the contrasting personal lives of our two spies: the personal challenges and the impact their world changing activities have on their marriages, their families and their own psyches. Asante’s imprint is right here, and along with her very talented actors, she has the opportunity to give us a completely fresh and multi-layered perspective on the Cold War thriller,” HanWay Films MD Gabrielle Stewart said in a statement.