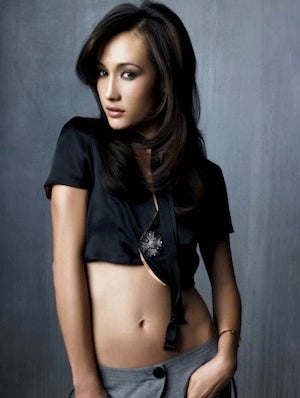 Maggie Q has said she doesn't want to be stereotyped by her action movies as just an Asian girl who fights. If her starring role in the new television drama "Nikita" fulfills expectations this fall, she could be pegged instead as the new face of The CW Network.

Not that The CW doesn't have enough faces right now. But executives at the youngest-skewing broadcast network are trying to branch out with new programming genres, and to age up a bit in their targeted audience, they're counting on Maggie Q.

Born to a Polish-Irish American father and a Vietnamese mother and raised in Hawaii, the 31-year-old Maggie Denise Quigley is older than typical CW stars, but seems born to play to role of Nikita.

She spent about eight years abroad, first modeling in Japan and Taiwan, and then acting in Hong Kong, where she starred in such action movies there as "Naked Weapon" and "Gen Y Cops," mostly beating up bad guys. Since returning to the U.S., she's appeared in such action films as "Mission: Impossible III" and "Live Free or Die Hard."

But this is her first venture into American television.

In Hong Kong, Maggie was managed by Jackie Chan and was trained in marshal arts by Chan's stunt team, becoming proficient in Taekwondo, Wing Chun and Wushu. And yes, she does her own stunts.

And in "Nikita," there will be plenty of opportunties for her to perform them. Maggie stars as a woman who has escaped from a covert U.S. agency that trained her against her will to be a spy and assasin, and now she has escaped and is seeking retribution on the agency — while it tries to eliminate her, of course.

The pilot is loaded with fight scenes.

The network has high hopes for the show. "La Femme Nikita" on USA Network from 1997 to 2001 produced the highest ratings on basic cable during its first two years.

"At the CW, we're trying to grow our programming as our audience ages up," Lori Openden, senior vp of talent and casting, told The Wrap. "Next season we'll have no more shows about high school. Nikita is a more adult show."

And just how high the network's hope are for the show can be seen in where they've scheduled it for next season — on Thursday night, leading out of the networks highest-rated show this season, "The Vampire Diaries."

Thursday nights are important nights for certain advertiser categories like movies, retail and restaurants that want to reach consumers going into the weekend. And it is also the second-highest viewing night on broadcast television, behind Sunday.

So the stakes are high for both The CW and for Maggie, whose consideration for the lead role in the series was initiated by Dan Shaner, an independent casting director that The CW brought in to cast the show.

"Dan originally mentioned Maggie as being perfect for the role," Openden told The Wrap, adding that when the network approached her back in February, it was Craig Silverstein's script that caught her attention.

After meeting with Warner Bros. executives, she was asked to do a screen test, which she did, and blew everyone away.

Openden told The Wrap that Maggie's Asian background has little to do with her ultimately being cast in the lead role — that it was all about her acting and her charisma off the screen — although it's a plus in that it adds to the network's on screen diversity.

And the network is hoping that her popularity in action movies will draw in some viewers outside the traditional CW wheelhouse.

Openden says that Maggie's personality will serve her well in promoting the show once it's on the air, citing an interview she did on the Jimmy Kimmel show to promote one of her movies as being a plus in moving along her selection for the role.

"We all feel that there's nobody we could have chosen to play this role better than Maggie," Openden says. "We feel we've hit the jackpot."