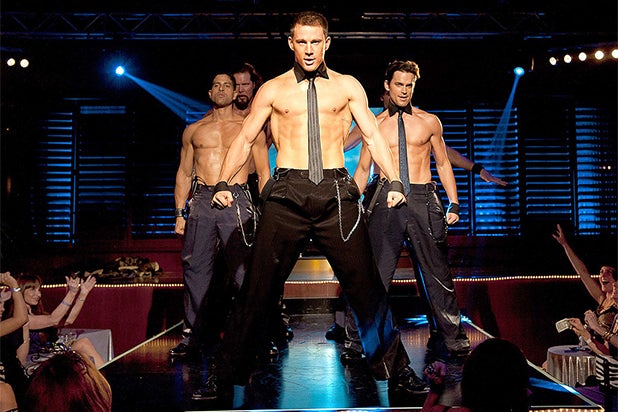 Despite a charismatic cast including Channing Tatum, Joe Manganiello, Matt Bomer and Adam Rodriguez, “Magic Mike XXL” has critics divided over just how much fun the stripper flick is.

Warner Bros. Pictures’ sequel to “Magic Mike” currently has an above-average rating of 64 percent on Rotten Tomatoes, with some critics celebrating the film’s body-positive message and others griping about its inability to create heat between its actors.

“If the first movie strip-teased audiences who thought they were getting a sexy celebration of man-flesh into watching a movie about desperate characters coping with the post-2008 economy, this sequel, for better or worse, delivers what its audience expects, and nothing more. To put this in terms of Steven Soderbergh — ‘Magic Mike XXL’ is less ‘The Girlfriend Experience’ and more Girls’ Night Out.”

“There are laughs in ‘Magic Mike XXL,’ like when Manganiello, coming down from a drug high, tries to win a bet about getting a surly female convenience-store clerk to smile. But the real eye-openers are the moments of sex-positive, woman-positive and emotion-positive contemplation.”

“Among the men, the chemistry just isn’t there, as insanely charismatic people like Tatum and [Donald] Glover exchange awkward glances, dead air hanging heavy between them as they recite self-referential — yep, there’s an ‘alright alright alright’ reference — pop-culture laden patter. (A sub-’21 Jump Street’ joke about catering to ‘Twilight’ teenyboppers similarly falls just short of acknowledging that this movie just did the exact same thing with the Backstreet Boys an hour earlier.)”

“But where’s the sin, the tawdry tension? ‘Magic Mike XXL’ is the opposite of prudish, to the point that the film gives off such an upstanding, body-positive energy that there’s almost nothing at stake. All the male characters appear to have a good, solid perspective on where they’re at — doomed to bad jobs once they retire from the stage — and that makes you wish at least one of them couldn’t have been trapped in his delusions.”

“‘Magic Mike XXL’ makes a considerable effort to show that the women most serviced by our hunk superheroes are the type we rarely see in Hollywood movies. Perhaps they have a few extra pounds on them, or don’t wear the most stylish clothes. Whereas most mainstream films have one token African American, our gang takes a side trip to a South Carolina ‘adult’ club packed with diverse faces.”