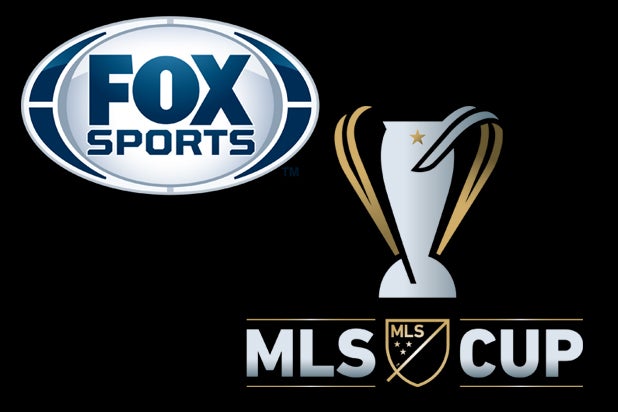 The biggest game in American professional soccer, Major League Soccer’s annual MLS Cup championship match, hasn’t exactly been must-see TV in the past, delivering just a 0.4 rating last year. The contest hasn’t registered a 1.0 rating since 2001, and peaked at 1.4 in 1996 — the first MLS Cup.

But this year could be different. For one thing, the match-up pits two of the league’s most popular franchises, the Seattle Sounders and Toronto FC.

And maybe more importantly, will air at 8 p.m. ET Saturday on Fox, a time slot free of competition from America’s No. 1 spectator sport, the National Football League.

“That’s something we really coordinated with MLS early on,” Fox Sports’ head of business of operations David Nathanson told TheWrap. “We alternate each year having either the MLS Cup or the All-Star Game. When we knew this year was going to be our Cup, we worked with MLS to really maximize the reach of that event.”

Another thing that will help maximize that reach: putting on Fox’s flagship broadcast channel. The inaugural MLS Cup in 1996 and the following 12 were aired on ABC, with the last seven on ESPN.

“It’s the first time that the MLS Cup will be on Fox,” Nathanson said. “It marks the first time it’s been on free-to-air television since 2008. First and foremost, we’re putting it on the broadest platform possible.”

MLS Cup has almost always been played on a Sunday, where it’s gone head-to-head with America’s most popular spectator sport – and ratings have suffered. twice took place on a Saturday afternoon – in 2012 and 2013 – but never a Saturday night.

That’s changed this year, and Fox has prominently advertised the soccer game during its NFL and college football broadcasts, trying to attract a broader audience. As soccer continues to gain in popularity among American viewers, it may not make sense to view it as niche NFL counter programming anymore — if it ever did in the first place.

“If you’ve watched any of the Fox properties over the past few weeks including the NFL on Fox and the college football [conference] championship matches, we’re promoting MLS Cup as really a top priority for the channel,” Nathanson said. “We had [studio host and former U.S. national team player] Alexi Lalas on ‘Fox and Friends.’ We rang the bell at Nasdaq. Building awareness of the MLS Cup and the pretty big rivalry.”

Fox also admittedly got lucky with the matchup, featuring two teams with rabid fan bases and rosters full of known quantities, from U.S. national team mainstays like Toronto’s Jozy Altidore, Michael Bradley and Jordan Morris, to international stars such as Toronto’s Sebastian Giovinco, a veteran of Italy’s powerhouse national team, and Uruguayan national Nicolas Lodeiro of Seattle. Green-clad Seattle and the Reds of Toronto should combine to deliver an early Christmas gift to the network.

“The soccer gods are shining down on us,” Nathanson said.

And although the league has in recent years said goodbye to big name mainstays like the L.A. Galaxy’s Robbie Keane and Thierry Henry of the New York Red Bulls, Nathanson said the league is in as good a place as ever — largely thanks to young homegrown players blossoming into key contributors.

“Our ratings are up 8 percent over last year,” he said. “We broke the record for the most watched MLS match on any network in 12 years with nearly 1.3 million people tuning into an MLS match on Sept. 18.”

That day, the league ran MLS matches adjacent to its NFL coverage, likely drawing plenty of viewers who tuned in for football but stayed for soccer. Stations that showed a 1 p.m. Eastern NFL game broadcast a 5 p.m. contest between Toronto and the New York Red Bulls, while those showing a late NFL game preceded football with the 2 p.m. Sporting Kansas City-LA Galaxy game. Football and futbol can, in fact, coexist quite well.

Fox is also unveiling plenty of new features for the game, including a heavy emphasis on virtual reality. The network introduced a VR live stream for a September college football game between Ohio State and Oklahoma, and is expanding on that for MLS Cup. The Fox Sports VR app is powered by LiveLike, and gives viewers five camera angles and access to a virtual “private suite,” with live rosters and stats.

“The entire game is going to be available with multiple camera angles in VR,” Nathanson said. “This is the first time we’re allowing users to essentially create their own replays.”