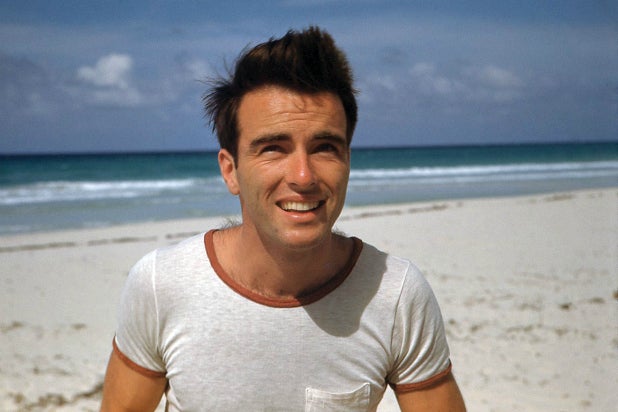 Montgomery Clift has been viewed as a tragic case since at least the publication of Patricia Bosworth’s 1978 biography, where his image became set as an innovative and very beautiful gay or bisexual actor who destroyed himself due to the external pressures of society.

But his nephew Robert Clift seeks to give a more nuanced portrait of his uncle in “Making Montgomery Clift,” a very revealing documentary that is based around a collection of audio tapes and other memorabilia kept by Robert’s father Brooks, who was Clift’s older brother. The Clift remembered here is not the doomed victim of so many mythologizing books and TV programs but a highly intelligent, mordantly funny man who successfully fought to keep his creative and sexual integrity intact.

“Making Montgomery Clift” is a provocative title that Clift himself might have enjoyed because it has a double meaning; to “make” someone, in old-fashioned slang, is to sleep with them, but this is also a movie about the making of Clift’s posthumous image, and Robert Clift very carefully separates fact from fiction or misrepresentation here, clearing away most of the sub-Freudian interpretation of his uncle’s life that seemed reasonable or fashionable 40 years ago. Clift fans will likely want to see this movie twice because it contains so much rare material.

We hear audio recordings of Clift’s mother Sunny speaking to Brooks about the first biography of her son, which was written by Robert LaGuardia and published in 1977. Her voice is angry, anguished, and very precise and lofty as she urges Brooks to correct the “untruths” in this book, and we also hear her say that anything he could write would be “superior,” a hint of the high opinion she had of herself and her family.

What we learn of Sunny in “Making Montgomery Clift” doesn’t necessarily contradict the books that depicted her as a domineering parent, but we do hear a precious bit of audio between Sunny and Monty that lets us understand the way he dealt with her — with humor. The film makes it apparent that the screen legend was a very funny guy and that people felt lucky to know him.

Jack Larson, who played Jimmy Olsen on the 1950s “Superman” TV series, talks about the first time he met Clift and how Clift very directly and unexpectedly grabbed the back of his head and kissed him. “As a person, he was nearer to Jerry Lewis on screen than he was to Montgomery Clift on screen,” Larson says. “He was one of the most affectionate people I have ever known, and he was affectionate in public.”

Clift’s friend and lover Lorenzo James declined to appear on camera, but he tells a similar tale on the soundtrack. “Monty’s personal life didn’t bother him as much as people thought it did,” says James. Clift didn’t marry a woman for protection like Rock Hudson, and he was as open as he could be about his sexuality in the 1950s; yet from the late 1970s to today, the myth of the “tragic gay star” has been used to define him. What Larson and James rightly insist on is the private Clift they both knew, who we see in lots of home-movie footage cavorting on beaches and acting lovably silly for the camera.

As early as 1958, Clift was being confronted by interviewers about his supposed urge toward self-destruction, and he deflected this with humor, saying to one of them that he “enjoyed jokes” too much to kill himself. “I have, I would say offhand, a rather large capacity for life,” Clift says. But no one has wanted to shine a light on his capacity for life, joy, and fun, for sex and silliness, because that doesn’t sell books or fit the often-homophobic image that was painted of him.

“Making Montgomery Clift,” which was co-directed with Robert Clift’s wife Hillary Demmon, takes pains to flesh out the actor’s creative integrity, too, putting up his script pages with his notes so that we can see just how much of his own dialogue he edited and re-wrote himself for movies like “The Search” and “From Here to Eternity.”

Also Read: 'On Broadway' Film Review: Documentary Offers Neon Lights But Not Much Else

We also see photos he took during his early theater days of stars he worked with, like Tallulah Bankhead and Alfred Lunt and Lynn Fontanne, and a portrait emerges of Clift here as the complete actor as artist. “One does direct oneself under certain circumstances, let’s face it,” he says in a TV interview.

Robert Clift appears on screen in “Making Montgomery Clift” as he goes through his father’s archive and interviews survivors, and he has that distinctive Clift look: the very dramatic hair, the blade of a nose, the inquisitive eyes, and even the somewhat throaty speaking tones. And so it is fitting that he ends this movie at the cemetery where Montgomery Clift is buried — in Prospect Park in Brooklyn, which is not open to the public — and shows us that Monty is next to his brother Brooks, who was such a key ally both in life and after his death.

There has not yet been a narrative biopic on his life, but if there ever is, “Making Montgomery Clift” should be consulted as a more realistic picture of this committed, very loving and sophisticated artist who was forced to make very few compromises.