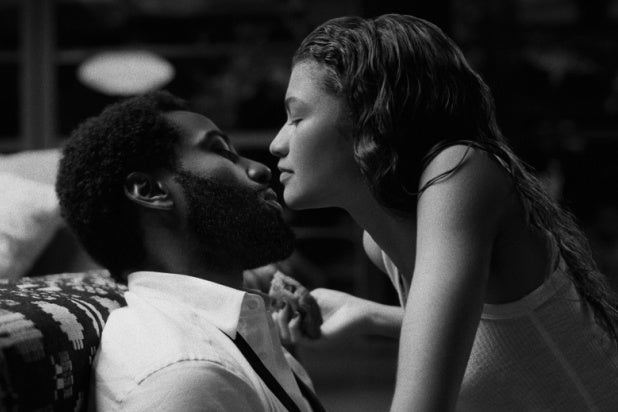 “Never go to bed angry” is an oft-repeated relationship rule, but few people bring up the necessary codicil, “You better be ready to process your feelings until the break of dawn.” The titular protagonists of “Malcolm & Marie,” played respectively by John David Washington and Zendaya, are more than prepared to take their current argument into the wee hours.

And while the script by writer-director Sam Levinson (“Assassination Nation,” HBO’s “Euphoria”) gives out before the dawn, the actors never do.

This black-and-white drama opens with the lead couple returning to their Malibu rental house following the premiere of writer-director Malcolm’s debut film. He’s ebullient; Marie isn’t saying much, but she’s got the facial expression of someone who’s very definitely Not Talking About Something. Malcolm finally notices and insists that she share what’s bothering her, and off they go. (Malcolm and Marie are the only characters in the film, which was shot during the pandemic, making the production what old show-biz types would call a “two-hander.”)

Marie’s opening salvo is that Malcolm forgot to thank her during his lengthy curtain speech, but that minor betrayal exposes a myriad of fault lines in their relationship, from his ego to her low self-esteem, not to mention the fact that she feels that Malcolm has raided her own past issues with drug addiction and rehab to create the female lead of his film, who’s having issues with drug addiction and rehab. And as the night wears on, grievances are aired and truths are revealed as these two people ruthlessly examine each other, both as individuals and as a couple.

It’s a very theatrical set-up, and one could imagine Levinson’s screenplay being performed onstage. “Malcolm and Marie” takes place within a house, but it never feels housebound, thanks to cinematographer Marcell Rév (“White God”) who knows when to get right up on the actors’ faces and when to give them the space to circle each other. Editor Julio Perez IV (“Under the Silver Lake”) skillfully compresses a four-to-five hour fight into a two-hour block yet makes the action feel like it’s unfolding in real time.

“Malcolm and Marie” starts strong, strategically offering character revelations that will lead viewers to rethink not only which side of this argument they’re on but also whether this couple should even stay together. The more we know about Marie and about Malcolm, however, the pettier their squabbles seem to be; their disagreements start in a real place and give way to minor issues, but Levinson tries to give each development equal weight. Still, even as the plotting unravels, the cast continues to make the outcome uncertain and of at least some interest.

This is the kind of screenplay that offers juicy opportunities for actors, and Zendaya and Washington leave nothing on the floor. Marie is the last reality check for Malcolm’s sense of self-aggrandizement, but she’s also much more of a mess than her glamorous exterior implies. Malcolm is quick and funny and apparently talented, but when it comes to Marie, he can pivot from adoring to devastating and back again with terrifying speed.

Also Read: Zendaya in Talks to Play Singer Ronnie Spector in Biopic From A24 and New Regency

(Malcolm gets a funny monologue about the ways white film critics get it wrong when reviewing the work of Black filmmakers; it might have been even better had a Black filmmaker written it, but here we are.)

“Malcolm & Marie” never becomes the “Who’s Afraid of Virginia Woolf?” to which it appears to aspire — although some enterprising Broadway producer should cast Zendaya and Washington in a revival, stat — but it gets respectably close. This new film nonetheless merits a look, if only as a showcase for two electrifying performances.