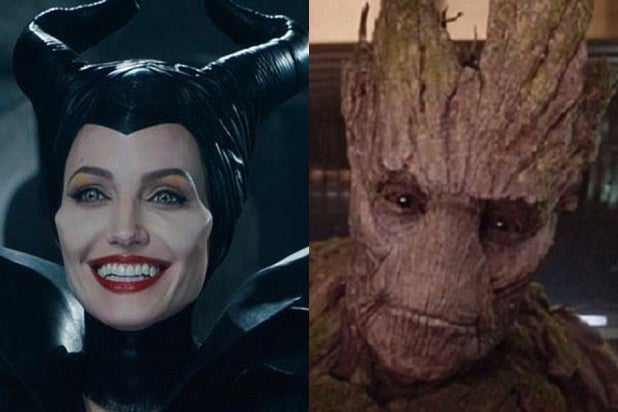 The evil queen played by Angelina Jolie in “Maleficent” and Groot from “Guardians of the Galaxy” are the hottest movie-inspired Halloween costumes for adults this year.

The top costume for kids was Olaf, the snowman from “Frozen,” according to a survey released Thursday by online ticket broker Fandango, and “Teenage Mutant Ninja Turtles” topped the family “team” costume category.

Jennifer Lawrence is represented twice on the ladies’ list: Katniss from “The Hunger Games: Mockingjay — Part 1” and Mystique from “X-Men: Days of Future Past” are the second- and third-most popular costumes. The Black Widow, Scarlett Johansson‘s character in “Captain America: The Winter Soldier,” was next and followed by Gamora, Zoe Saldana‘s character in “Guardians.”

The men’s list was rounded out by: “Captain America,” “Ninja Turtles,” Christ Pratt’s Star Lord character from “Guardians” and Vlad the Impaler from “Dracula Untold.”