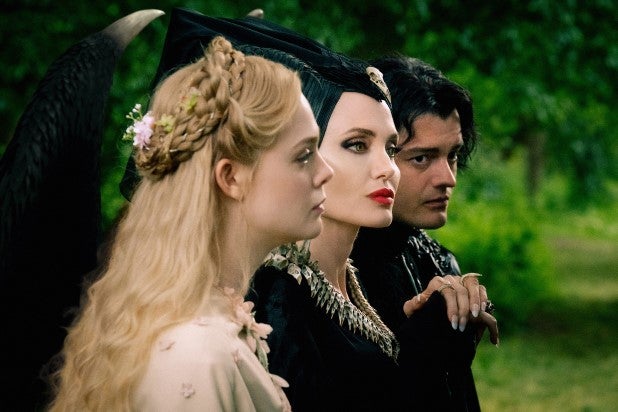 “Love doesn’t always end well,” snarls Maleficent (Angelina Jolie) to Aurora (Elle Fanning) early on in the latest chapter of her namesake sequel, “Maleficent: Mistress of Evil.” Within moments, the uneasy relationship of reluctant protector and good-spirited princess between the two characters is re-introduced, picking up where the original “Maleficent” left off.

If Maleficent’s words sound like a promise more than a warning to her accidental ward Princess Aurora, that’s because the pain of betrayal by her beloved Stefan (Sharlto Copley, who does not return for another round) still stings. Maleficent’s mistrust and distaste of all humans save for her precious beastie, her pet name for Aurora, reaches new comical notes when Prince Phillip (Harris Dickinson, “Beach Rats”) proposes.

For the sake of Aurora, Maleficent puts aside her misgivings and agrees to meet Phillip’s parents, the likable-enough King John (Robert Lindsay) and the dastardly wicked Queen Ingrith (Michelle Pfeiffer). When old tempers flare over dinner, Maleficent is forced to flee their castle, finding refuge in a exile island of winged fairies like herself. Reunited with her kind, Maleficent is tossed in the middle of their debate of whether or not to attack the humans and to reclaim the lands that were stolen from them. This time, she might be less inclined to forgive out of love.

Directed by Joachim Rønning, who salvaged another Disney live-action sequel (“Pirates of the Caribbean: Dead Men Tell No Tales”), “Maleficent: Mistress of Evil” lacks the bite of the first. There are interesting bits within the film that are by themselves entertaining but don’t always seem to fit together. The action scenes feel less messy than the first, the CGI sharper with age, but there’s a darkness in Henry Braham’s cinematography that made some underlit night scenes difficult to see.

The shining jewel in this crown belongs to the costumes of Ellen Mirojnick (“The Greatest Showman”), who uses complicated patterns and textured fabrics for a fantastically different look. That means plenty of snakeskin horns for Maleficent and Liberace-grade crystals, pearls and fur for Queen Ingrith.

See Photos: 16 Live-Action Disney Movies in the Works After 'Maleficent: Mistress of Evil'

The addition of two new screenwriters, Micah Fitzerman-Blue and Noah Harpster, seem to have curbed the poignant story and script Linda Woolverton brought to the original. Maleficent’s allegorical tale of survival feels defanged in a rather basic “Meet the Parents” but make one of them a wicked monarch scenario. The story’s deeper meaning, a call for humans and fairies to live in harmony, feels somewhat unfulfilling, even though the film spends much of the time building up to it.

Jolie leans into her character’s wounded journey but not emotionally. She seems more distant this time around, perhaps because her character is now not motivated by an emotional betrayal but a physical attack. When she retaliates, the edge is dulled as her actions seem justified in an act of self-defense against those who struck her first. She’s less the Mistress of Evil than her poster would suggest. Once again, she’s more like the misunderstood victim as she was in the original.

Tragically, “Maleficent: Mistress of Evil” does not give Jolie and Pfeiffer nearly enough time to face off against each other. As with the original, Sam Riley once again dutifully provides some sense of levity as Maleficent’s shape-shifting assistant, Diaval.

The movie’s simplistic story also doesn’t allow for very many other characters to develop beyond a one-sentence description. While it’s exciting to see Chiwetel Ejiofor in the cast, his character Conall exists essentially to save Maleficent and to advocate on behalf of humans. The same could be said for Warwick Davis’ awfully named character Lickspittle. The good news that the introduction of new faces means less time with the squeaky three fairies played by Juno Temple, Lesley Manville and Imelda Staunton, who wore out their welcomes in the first film.

The best feature the “Maleficent” series has going for it is that it’s no longer cursed to follow an animated original. This is a spin-off so far removed from its source that if Disney wanted to make another sequel, they are free to take much more creative liberties than they did with “Mistress of Evil.”