While it’s not quite the stealth megahit of its 2008 predecessor, “Mamma Mia! Here We Go Again” has done what Universal intended for it to do: serve as an alternative for female audiences from the likes of “Mission: Impossible – Fallout” and “The Meg,” as the ABBA musical sequel quietly passed $100 million at the domestic box office during its fourth weekend in theaters.

The numbers for the film also continue a firmly established trend at the box office: while fewer mid-budget films have managed to stand out on the box office charts, a film with a $60-80 million budget can make its money back if a studio can successfully hit a demographic that many blockbusters ignore: Gen X and baby boomer women. Such was the case when “Mamma Mia!” grossed $609 million worldwide a decade ago, and the same is true with “Here We Go Again,” as it hits $280 million worldwide against a $75 million budget.

According to data from Movio, the film’s opening weekend — which was just under $35 million — was at first dominated by younger women and group/family audiences. Over 25 percent of tickets sold on opening day were sold in groups of two or more, with the average age sitting at 37.

But starting on the film’s opening Saturday and continuing through the rest of the weekend, the film’s audience heavily skewed older. After Saturday and Sunday, the average age for the entire opening weekend rose to 46. While recent musicals like “La La Land” and “The Greatest Showman” had audiences that were more equal in terms of gender and age breakdown, the audience for “Here We Go Again” over the past month has been more than two-thirds female, with 47 percent of the audience being women age 40 or over. 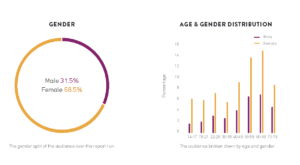 On top of that, Movio says that the audience for “Here We Go Again” had a higher percentage of infrequent moviegoers — those who go to the movies less than four times a year — than the national average. Whether it’s because of its musical appeal or a cast that includes Colin Firth, Cher and Meryl Streep, this film is reaching out to a large audience that generally doesn’t go to a specific film in such large numbers… which is exactly why Universal gave this sequel the green light.

We saw this trend earlier in the year with Paramount’s “Book Club,” a film starring several boomer actresses like Jane Fonda and Diane Keaton, a film that the studio bought for $10 million and made a solid profit as older women drove the film to a $68 million theatrical run.

And while it’s for a different demographic, we should see something similar when “Crazy Rich Asians” hits theaters next weekend. Just as women over 40 showed up for “Mamma Mia!” way above the average for their age group, Asian audiences are expected to heavily overrepresent for Jon M. Chu’s film even as they account for just six percent of all tickets sold domestically last year.

In other words, representation matters, whether it’s ethnicity, age or gender. And if a studio has a quality film that fills that representation demand, it won’t need a microbudget or a name-recognition franchise to turn a profit.