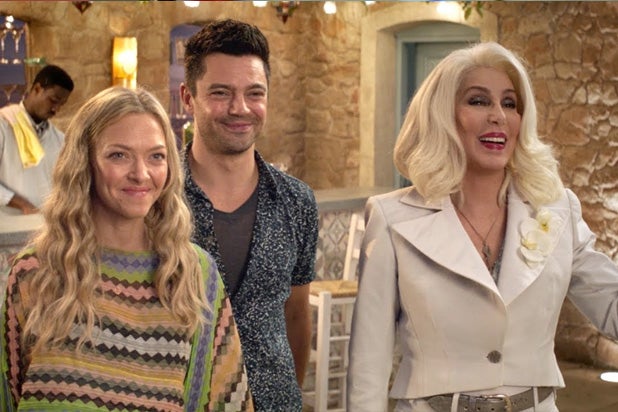 “Mamma Mia! Here We Go Again” danced to $3.4 million at the Thursday box office, while Sony’s “The Equalizer 2” took in $3.1 million at the previews.

In 2008, the original “Mamma Mia!” earned a modest $27 million opening weekend while serving as counter-programming to “The Dark Knight,” which opened the same weekend. (The adaptation of a London and Broadway stage hit eventually earned nearly $610 million worldwide on a $52 million budget.)

Independent trackers are expecting that “Here We Go Again” will improve on the opening of the original “Mamma Mia!,” projecting an opening of $32-34 million from 3,200 locations while carrying a higher production budget of $74 million.

Antoine Fuqua’s “The Equalizer 2” is also opening this weekend, with Denzel Washington reprising his role from the first action film. 2014’s “The Equalizer” opened to $34 million and made $101 million domestically. The sequel is projected to open to slightly less with $27-30 million from 3,300 locations, though Sony is expecting higher weekday grosses.

“The Equalizer 2” holds a score of 47 percent on Rotten Tomatoes.

Opening in targeted release is BH Tilt’s “Unfriended: Dark Web,” a sequel to Blumhouse’s 2015 social media horror film “Unfriended.” Produced on a $1 million budget and depicted through a computer desktop, “Unfriended” made $64 million worldwide off a $15 million opening. “Dark Web” is expected to make half that opening, with trackers projecting a $6-8 million start. “Dark Web” holds a score of 57 percent on Rotten Tomatoes.

Finally, Lionsgate’s Summit Entertainment and Codeblack Films will send in the Oakland race dramedy “Blindspotting” for limited release this weekend.

Earning critical acclaim at Sundance, the film is written by and stars Daveed Diggs and Rafael Casal as a black ex-convict trying to peacefully finish his probation period. The film will open on 14 screens in five markets: Los Angeles, New York, Chicago, San Fransisco and Oakland, where the film takes place. It currently has an 91 percent RT score.