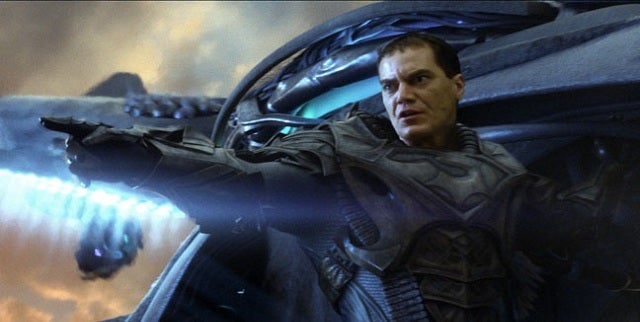 Before its blockbuster opening, the take on “Man of Steel” was that it was not your father’s Superman. But dads turned out in droves this weekend for the darker, more explosive comicbook adaptation.

A bigger-than-expected Father’s Day Sunday lifted the domestic box-office haul for “Man of Steel” to more than $128 million, well ahead of box-office projections heading into the weekend. And with another $73 million from overseas, “Man of Steel” has brought in more than $200 million in its first four days.

In the U.S. and Canada, it was dads – or at least men over 25 — who accounted for 62 percent of the audiences and drove the most business to the first Superman movie in seven years. That’s an older skew for a superhero movie, particularly when you consider that the young “fanboy’ crowd came out en masse on Thursday night and Friday. But that’s not a bad thing, at least in this case.

“You have to realize that this is a four-quadrant (young, old, male and female) hit,” BoxOffice.com senior analyst Phil Contrino told TheWrap, “so the bottom line is, a lot of people of all sorts came out. With the exception of the ‘Twilight’ movies, that’s pretty much the only way to get to those kinds of grosses.” The older skew suggests that Warner Bros. and Legendary Pictures may have found a sweet spot in appealing to the younger crowd with the more explosive and grittier elements of the character while still drawing crowds who were familiar and comfortable with the traditional man from Krypton.

Disney pulled off a similar feat last year with “Wreck-It Ralph,” connecting with video game-savvy youngsters, while pulling in their parents with references to classic video stars like Super Mario.

“I think our crowds will definitely get younger over the next few weeks,” Warner Bros. head of distribution Dan Fellman said, “and that gives us room to grow there, so it’s a positive.”

The older skew may have affected the 3D numbers, too. Theaters in which 3D was available  accounted for about 40 percent of the grosses.

“That’s decent,” Contrino said, “but with that older skew, you have to think there’s a big group out there that was used to seeing their Superman in 2D, and was just fine with that.”

The domestic 3D numbers weren’t a concern to Fellman.

“Overseas is where that really becomes a factor,” he said. Foreign audiences, for whom 3D is still an emerging format, remain far more enthralled – and willing to pay for it — with it than domestic crowds. And Warner Bros. is counting on overseas to provide a major boost for “Man of Steel.” That’s a switch, because Superman, like Batman, is a very American superhero and has not traditionally performed strongly overseas. Less than half of the $888 million the previous films have brought in globally has come from overseas. But “Dark Knight Rises” reversed that trend for the Caped Crusader and Warner Bros., and it appears Christopher Nolan‘s involvement helped with “Man of Steel.” Nolan, who wrote and directed the recent Batman trilogy for the studio, wrote the story for "Man of Steel" and produced it, with Zach Snyder handling directing duties.

The movie took in the $73 million this past weekend from 24 territories, and only three were top ten markets. U.K. moviegoers turned out in force to see British star Henry Cavill as Superman, and made that the biggest market with $17 million. “Man of Steel” also added $9.8 million from Mexico and $8.8 million from South Korea.

This weekend, when “Man of Steel” debuts in 26 more markets including China, Russia, Germany and France, could be even bigger.

The impact of its success could be felt for years. There will be a sequel, but it also clears the way for Warner Bros. to kick-start a Justice League franchise based on Superman, Batman and other DC Comics superheroes and villains, as Disney has with its Marvel Comics characters like “Iron Man” and “The Avengers.”

All that in four days is quite a feat for your dad’s – or anyone’s — Superman.