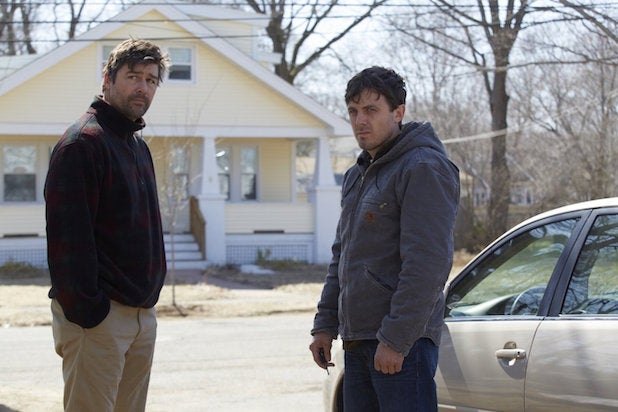 "Manchester by the Sea" / Amazon Studios

The last of those films received two nominations, and also was voted a special award for its ensemble cast.

Lucas Hedges from “Manchester by the Sea” and Sasha Lane from “American Honey” were among the Breakthrough Actor nominees, while the Bingham Ray Breakthrough Director nominees included Daniel Kwan and Daniel Scheinert for “Swiss Army Man” and Robert Eggers for “The Witch.”

“Cameraperson,” “I Am Not Your Negro,” “Tower,” “Weiner” and the ESPN miniseries “O.J.: Made in America” were nominated for Best Documentary.

In the Breakthrough Series – Long Form television category, nominees were “Crazy Ex-Girlfriend,” “The Girlfriend Experience,” “Horace and Pete,” “Marvel’s Jessica Jones” and “Master of None.”

The Gotham Awards will take place on Nov. 28 at Cipriani Wall Street in New York City.

The New York-based Gotham Awards are one of the two major awards shows devoted to independent film, with the other being the Los Angeles-based Film Independent Spirit Awards.

The Gothams take place early in awards season, while the Spirit Awards are handed out at the end of the season, the day before the Oscars.

Gotham nominees are selected by a number of different juries made up largely of film critics. To qualify for an award, a film must be “made with an economy of means” and directed and/or produced by a filmmaker born or based in the U.S. Nominees must also qualify as “filmmaking with a point of view.”

Over the last five years, seven of the 25 nominees in the Gothams’ Best Feature category have gone on to receive Best Picture Oscar nominations. Over the 12 years since the Gotham Awards introduced the Best Feature category, the winner has subsequently won the Oscar only three times — but those three have all been in the last seven years, including the last two years in a row with “Birdman” in 2014 and “Spotlight” in 2015.

Best Feature
“Certain Women”
“Everybody Wants Some!!”
“Manchester by the Sea”
“Moonlight”
“Paterson”

Also Read: 'Everybody Wants Some!!' Review: Richard Linklater Scores With Another Nostalgic Rush

Best Documentary
“Cameraperson”
“I Am Not Your Negro”
“O.J.: Made in America”
“Tower”
“Weiner”

* The 2016 Best Actor/Best Actress and Breakthrough Actor nominating panels also voted to bestow a special Gotham Jury Award for ensemble performance to “Moonlight,” “in which actors at all levels of experience give outstanding performances that speak eloquently to one another both within and across each chapter of the story.” The awards will go to actors Mahershala Ali, Naomie Harris, Alex Hibbert, André Holland, Jharrel Jerome, Janelle Monáe, Jaden Piner, Trevante Rhodes and Ashton Sanders.