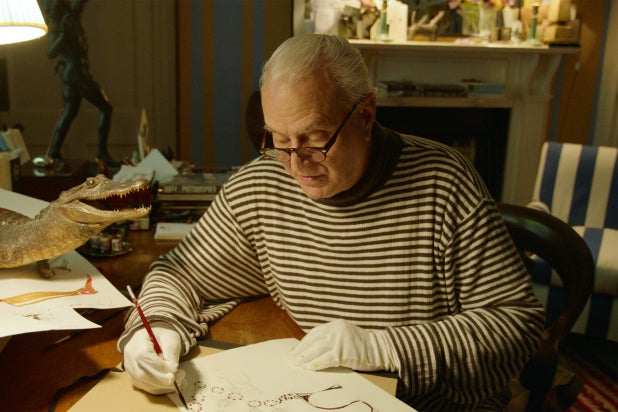 Manolo Blahnik, the world’s most famous shoe designer, sits at his desk, a little fussy and a little grouchy, next to a taxidermied alligator, sighs about the “nonsense” of spending two years making a documentary and, in voice over, describes director Michael Roberts as a “disaster.”

But this film isn’t going to be a warts-and-all affair. Monstrous personalities are not on the menu of “Manolo: The Boy Who Made Shoes for Lizards,” and there is no enmity between the two men; it’s fashion writer Roberts’ first documentary feature, but he’s known Blahnik, his friend and subject, for decades, and the ensuing 90 minutes is a pedestrian yet engaging bit of hagiography.

Of course, it’s also true that a sneaker-wearing dullard’s idea of extravagant praise is often a kitten-heel-obsessive’s understanding of naked truth. And if shoe worship in “Manolo” is taken as given, Roberts doesn’t hold back when laying out the articles of faith for Blahnik’s enthusiastic cult. Anna Wintour is here. Smiling. Laughing. Without sunglasses. And she wears no other brand of extremely expensive mule.

“Manolo” traces Blahnik’s life from a sunny, privileged childhood on La Palma, one of the smallest of Spain’s Canary Islands, where he did indeed fashion tiny shoes for lizards out of Cadbury chocolate foil, to young adulthood in Paris, where he loved being involved in the fashion world, but shut himself up in his home during the 1968 protests because, he couldn’t bear “violence, marches, crowds, and smells.”

Leaving France for London, Blahnik showed his first, admittedly disastrous, collection in 1971, was struck speechless when introduced to Vogue magazine legend Diana Vreeland, and then kept at it, diligently — while also partying with David Hockney and Bianca Jagger — until he perfected his craft.

As “Manolo” glides and glosses over this march to fame, Blahnik collects friends and colleagues, but apparently no romantic partners; his refusal to form those sorts of inherently messy relationships seemingly align him with an old-fashioned high gay aesthete sensibility. Most importantly, he accrues customers whose devotion borders on the religious. Sarah Jessica Parker, the MVP who did more to raise global Blahnik awareness than any other living human being, is seen in a clip from “Sex and the City,” crying foul as a mugger steals her purse and her favorite Manolos.

Also Read: Want to Make Your Own 'Game of Thrones' Cape? IKEA's Got You

Blahnik as interview subject is suitably chatty and charming, especially when he’s being evangelical about Cecil Beaton, Goya, the Four Seasons Hotel in Milan, and Luchino Visconti’s “The Leopard.” If the film had simply been the man talking about his cultural influences, that would have been enough, a survey in beauty from a man who knows how to translate that ineffable idea into a shoe that sprouts feathers.

Formally staid in comparison to its subject, Roberts lets talking heads do a lot of the lifting, and they don’t disappoint, pressing the Blahnik Way with a cozy zealotry. There’s Isaac Mizrahi (the subject of the 1995 documentary “Unzipped,” the bouncy standard bearer for fashion doc as entertainment) gushing about Blahnik wearers as having “the happiest feet in the world.” There’s effortlessly be-caped Andre Leon Talley, the breakout star of “The September Issue,” describing Blahnik, matter-of-factly, as “a visionary poet.”

The roll call of admirers is lengthy. Longtime friend and fellow designer Paloma Picasso, Wintour, 60s model Penelope Tree, Sofia Coppola (not counting that one pair of Converse Chuck Taylors, all the shoes in “Marie Antoinette” were designed by Blahnik), Naomi Campbell, and Cambridge professor Mary Beard weigh in on Blahnik’s single-minded devotion to his field, with Beard delivering quick but solid sound bites about the cultural influence of the man whose imagination for footwear is predicated on a deep appreciation and understanding of their meaning and place in history.

And then there’s Rihanna. In a poignant sequence, Blahnik remembers close friends and style muses like designer Tina Chow, fashion writer Anna Piaggi, and editor Isabella Blow, all of whom have passed away, before conferring his blessing on Rihanna, describing her as “the new Grace Kelly.” The two, interviewed together, seem adorably smitten with each other.

The flaws, then, in “Manolo” don’t involve the fashion world’s easily parodied brand of air-kissy hyperbole. Rather, they take the form of director Roberts’ insistence on inserting advertorial-like still-life portraits of Blahnik shoes hanging from trees or washing up with starfish on a seashore. They lie in sore-thumb reenactments of pivotal moments in the designer’s life: childhood, meeting Vreeland, cavorting in London. There’s even a puzzling recreation of the “Hot Voodoo” scene from one of Blahnik’s favorite Marlene Dietrich movies, the 1932 Josef von Sternberg drama “Blonde Venus.”

Where “Manolo” really comes alive is in the workshop. Roberts spends an altogether too brief amount of time in Blahnik’s Italian factory, and though the designer himself seems to love being in the space — working alongside his small army of experts, whose painstaking stitching and fitting efforts are captured in a way that recalls the far deeper dives into process found in the fashion documentaries of Belgian director Loïc Prigent (“Signé Chanel”) — those sensual pleasures are withdrawn almost as quickly as they’re offered.

Whoever makes the next Blahnik doc — and there have been several about Yves Saint Laurent, so there’s no reason to call it one and done — would do well to spend more time with the people handcrafting those high heels. Those folks have stories Rihanna doesn’t.