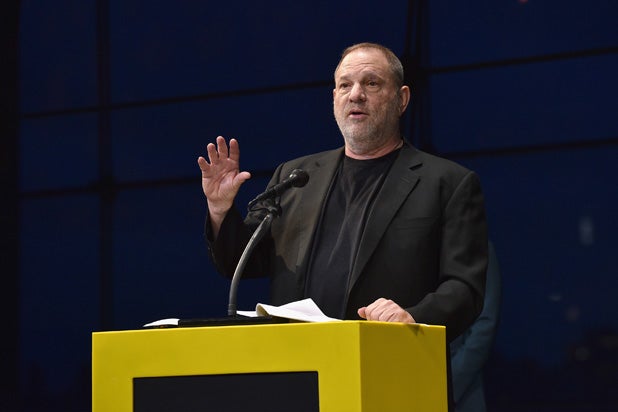 For many in Hollywood, one of the biggest scandals surrounding Harvey Weinstein is that it took so long for the sexual harassment allegations against him to come to light.

“The only surprise is, ‘What took so long?'” one longtime PR executive told TheWrap, speaking on the condition of anonymity.

Weinstein paid at least eight women over a 30-year period to settle allegations of sexual harassment and misconduct, the New York Times reported in its bombshell. The mogul said much of the story was “patently false” while admitting his workplace behavior “caused a lot of pain.” An insider told TheWrap that the payoffs might be as many as 12.

“Finally,” one top film studio executive said. “The culture has caught up with this kind of behavior. It’s not tolerated, and thank God.”

The Times report included general accusations that Weinstein’s companies, Miramax and The Weinstein Company, were unfit workplaces when it came to the top executive — as well as specific accusations from women who included Ashley Judd.

“It’s the reason people had problems with him. People would speak out against him and leave,” the film executive said.

“In interviews, eight women described varying behavior by Mr. Weinstein: appearing nearly or fully naked in front of them, requiring them to be present while he bathed or repeatedly asking for a massage or initiating one himself,” the Times wrote.

She said Weinstein once yelled that she should marry a “fat, rich Jewish” man because she was probably just good for “being a wife” and “making babies.”

“I had no idea it was so systemic, but Hollywood is a sexist place,” one veteran female producer who has worked with The Weinstein Company said.

“Will this really change anything? When the president of the U.S. can get elected after being outed as a sexual assaulter?” the producer wondered, referring to President Trump’s infamous claim he could grab women by their genitals.

Writer and actress Lena Dunham took to Twitter to applaud the Times’ pushing past the “flimsy but firm veil of secrecy” in Hollywood.

Actress Rose McGowan, one of the women who received a settlement from Weinstein, according to the Times, sent a tweet after the story published.

“Anyone who does business with __ is complicit. And deep down you know you are even dirtier. Cleanse yourselves,” McGowan wrote.

The non-profit gender parity group Women in Film said the Weinstein story is an occasion to enact change.

“We encourage women to continue speaking up about issues of sexual harassment, which is an all-too-common form of discrimination,” Kirsten Schaffer, executive director of WIF LA, told TheWrap in a statement.

“That so many people knew about Harvey Weinstein’s behavior and didn’t say anything, particularly other men, is an indication of how deeply entrenched discrimination is in the film and TV business — and in culture overall. The time for change is now,” Schaffer added.

“Should you want to look it up, we have information on our website about what to do if you are a victim of sexual harassment, including resources and process.”