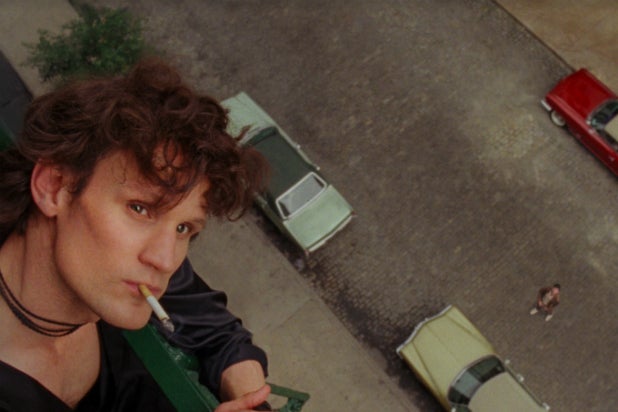 The major thing that “Mapplethorpe” has in its favor is that the film is afraid of neither the life nor the work of the notorious photographer Robert Mapplethorpe.

Documentary director Ondi Timoner (“We Live in Public”), making her narrative debut, has ensured that this movie acknowledges the many hard edges and unattractive qualities of this man while also celebrating and not looking away from his most explicit and scariest photographs, many of which rather surprisingly appear on screen.

Most mainstream films are afraid of showing the male penis, or anything having to do with sadomasochism, but Timoner’s attitude here seems to be, “Bring it on!” (Not to put too fine a point on it, but this film is basically wall-to-wall male genitalia, both on actors in the narrative sections and in the photos themselves.) Timoner’s gutsiness is shared (and then some) by her star Matt Smith, a British actor who very convincingly played another gay male icon, writer Christopher Isherwood, in a TV movie of Isherwood’s memoir “Christopher and His Kind” in 2011.

Also Read: 'Mapplethorpe,' 10 Other Projects Chosen for Tribeca All Access

Smith’s Mapplethorpe is first seen staring at himself in a mirror, and right away we can see that this guy is very much narcissistically alone in the world. He thinks only of himself and of becoming a famous artist, and he is up-front about that with everyone he meets, to an absurd degree. Mapplethorpe wasn’t afraid to be something of an idiot and more than something of a jerk in order to achieve what he wanted to achieve, and Smith never softens him.

Timoner was working with a limited budget and shooting schedule, and so she is unable to really suggest the 1960s and 1970s visually, though she does catch the essence of the sterile 1980s once Mapplethorpe ages into that period. She only sketches the bond between Mapplethorpe and punk icon Patti Smith (Marianne Rendón), which was described so touchingly in Smith’s 2010 memoir “Just Kids.” Nobody mythologizes Patti Smith quite like Patti Smith herself, and Rendón is just too cute and too nice to really capture the harsh essence of Smith here.

As Mapplethorpe’s lover and financial supporter Sam Wagstaff, John Benjamin Hickey is handicapped by the fact that he doesn’t really look much like Wagstaff, but he acts the part very well and creates a chemistry with Smith, who really comes boyishly alive in his scenes with Hickey. Smith’s Mapplethorpe is at his most appealing with Wagstaff because he needs the older man’s love and money so desperately, and he makes no bones about that. Whatever else might be said of Mapplethorpe, he was always direct.

Timoner also doesn’t shy away from the very ugly side of Mapplethorpe’s relationship with the vulnerable Milton (McKinley Belcher III, “Ozark”), an African-American male who is swept up into being Mapplethorpe’s lover and favorite subject almost against his will. Mapplethorpe’s ruthlessness as a man and as an artist is seen at its worst here, and Smith throws himself into this as he does everything else in this movie: volubly and very physically.

Even if budgetary restraints sometimes keep Timoner from fully capturing the time she is re-creating, nothing holds Smith back from making Mapplethorpe come alive again, in every sense. Smith’s New York accent is impeccable, and he often looks like he is having the time of his life in this movie, mainly because it must have been great fun to play someone so confident.

Smith gives Mapplethorpe the patter and the darting eyes of a street hustler, which is basically what he was. He was also a Charles Baudelaire-style romantic who gathered up all the flowers of evil he could before being wiped out by AIDS, the disease that took down so many significant gay men of his generation.