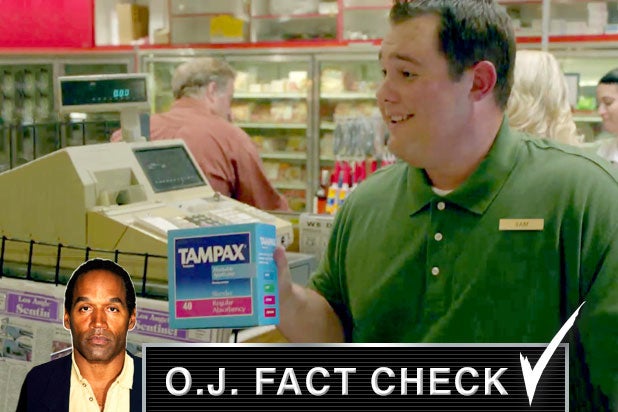 On Episode 6 of “The People v. O.J. Simpson,” Marcia Clark’s world closes in.

The case isn’t going well. She’s in danger of losing her kids. And almost everyone is making fun of her hair — one reporter says she looks like Rick James, and even O.J. Simpson makes a face as she walks into the courtroom.

A miserable day ends with a trip to the grocery store, as Portishead’s “Nobody Loves Me” plays in the background. Scanning past tabloids mocking her new look, she hands over her purchases to the clerk. He holds up her box of Tampax, and announces:

“Uh-oh. Guess the defense is in for one hell of a week, huh?”

You may think the Marcia Clark Tampax moment was a joke added by the show. It wasn’t. Welcome to O.J. Fact Check.

THE POINT OF THE SCENE
The episode, which happened to air on International Women’s Day, highlights the sexism, double standards and fixation on Clark’s looks that the men in the case never suffered. She was fighting to convict a man she believed in her bones had beaten and killed Nicole Brown Simpson — but many people cared more about her hair.

The clerk’s joke about PMS illustrates just how casually and callously people got into her business.

OK, THE SHOW AT LEAST EXAGGERATED THE TAMPAX THING, RIGHT?
No! It happened pretty much exactly like the show said — though probably not with Portishead playing.

Here’s an excerpt from “The Run of His Life,” the Jeffrey Toobin book that inspired “The People v. O.J. Simpson”:

At times, the compounded stresses of ending a long marriage, trying the Simpson case, and enduring the indignities of unsought celebrity nearly drove Clark to the breaking point. At the supermarket one day, as she bought some Tampax, the grocery bagger quipped, “I guess the defense is really in for it this week.”

THE VERDICT
You can’t make this stuff up.

ANYTHING ELSE?
The show suggests that the one bright spot for Clark (played by Sarah Paulson) is the support of prosecutor Chris Darden (Sterling K. Brown). He alone has her back, professionally and personally. (He even writes her a note about her hair: “It looks FANTASTIC! I Love It!”)

The show ends with her resting her head on his shoulder, and him taking her hand in his. Is it insinuating any relationship between them?

We’ll address that in a future O.J. Fact Check.