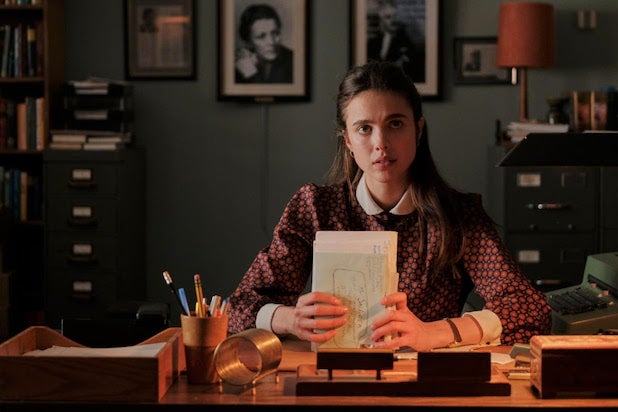 IFC Films has acquired the U.S. rights to “My Salinger Year,” a drama starring Margaret Qualley and Sigourney Weaver that made its debut as the opening night film at the Berlinale 2020, the distributor announced Tuesday.

Philippe Falardeau (“Monsieur Lazhar”) directed and wrote the film that’s based on the memoir of the same name by Joanna Rakoff.

“My Salinger Year” is set in New York in the ’90s and follows a recent graduate with dreams of becoming a writer who takes a job as an assistant to the stoic and old-fashioned literary agent of J.D. Salinger. Her office still has old-fashioned dictaphones and typewriters and agents doze off after three-martini lunches, and her job is to process the large amount of fan mail sent to Salinger. But as she reads the heart-wrenching letters from around the world, she becomes reluctant to send the agency’s impersonal standard letter and impulsively begins personalizing the responses with humorous and moving results. And though she’s writing in Salinger’s voice, she begins to discover her own voice.

“My Salinger Year” is produced by Luc Déry and Kim McCraw of Mirco_scope and co-produced by Ruth Coady and Susan Mullen of Parallel Films in association with Memento Films International and La Cinéfacture.

“We look forward to collaborating with Phillippe once again, this time on the adaptation of a highly acclaimed memoir and an authentic New York story brought to life by excellent performances from breakout Margaret Qualley and Sigourney Weaver,” Arianna Bocco, EVP of acquisitions and productions at IFC Films said in a statement.

“We’re delighted by IFC’s acquisition of ‘My Salinger Year.’ The US distribution was an important objective when we acquired Joanna Rakoff’s memoirs back in 2015. This coming-of-age story is rooted in the literary world of New York and we’re convinced it can appeal to a variety of audiences especially considering Margaret Qualley and Sigourney Weaver’s beautiful performances. IFC’s worldly collection of films is both exciting and varied and we’re happy to be part of it,” Falardeau said in a statement.

The deal for the film was negotiated by IFC Films’ EVP of acquisitions and productions Arianna Bocco with UTA Independent Film Group and Memento Films International on behalf of the filmmakers.

IFC Films has remained busy during the coronavirus with both acquisitions and new releases in both drive-in theaters and on-demand, including “The Trip to Greece” this upcoming Friday.

Qualley is a breakout star from Quentin Tarantino’s “Once Upon a Time in Hollywood,” and she also starred in “Fosse/Verdon” and “Seberg.” Weaver will next be seen in “Ghostbusters: Afterlife” and in the “Avatar” sequels.

Variety first reported the news of the acquisition.