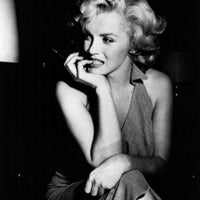 Farrar, Straus and Giroux announced on Tuesday it plans to publish a collection of Monroe’s writing in October. Entitled “Fragments,” FSG promises the book “reveals a very different side” of the late starlet.  It will also “contain a small collection of rarely seen photographs as well as reproductions of selected documents-mostly handwritten in Monroe’s own hand, some of them typed."

According to GalleyCat, Anna Strasberg – who heads the Monroe estate — brought the "never-before-seen writings" to family friend Stanley Buchthal and book editor Bernard Comment, who served as “Fragments” editors.